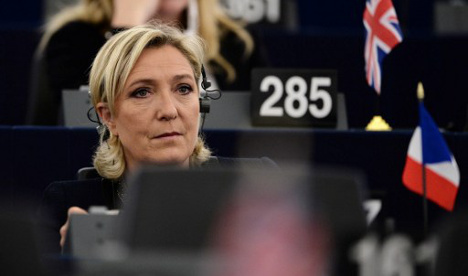 Le Pen at a debate in the EU Parliament. Photo: AFP

The anti-EU Le Pen is suspected of illegally paying wages to two parliamentary assistants who were working on matters not pertaining to her role as a European lawmaker, an official from the parliament and another source told AFP.

“The parliament knows it must begin to recover the sum in question from Marine Le Pen,” the parliamentary source, who asked to remain anonymous, said to AFP.

Another source said that Le Pen, who is a major candidate for the French presidency next year, had missed a four-week deadline given on September 30th to provide feedback on the case.

A lawyer for Le Pen, Marcel Ceccaldi, told AFP his client will refuse to cooperate without first receiving the full report on the matter from the EU's European Anti-Fraud Office (OLAF).

“How can you possibly separate the activities of a MEP and the president of a major political party,” Ceccaldi said.

“European debates and questions on French society, such as migration and Europe's visa-free Schengen policy, are intimately linked,” he said.

Florian Philippot, a top advisor to Le Pen, told French news channel BFMTV that the bloc was harsh on those who questioned it.

“At the European Union, the arbitrary reigns,” he said. “It goes easy on its friends… and is merciless with its adversaries.”

OLAF meanwhile confirmed in an email that its investigation was completed in July.

“In this particular case, OLAF sent its final report containing financial recommendations to the European Parliament, so that any EU funds unduly paid are returned to the EU budget,” the office said.

French police are also investigating the allegations in a separate probe that is still ongoing. The current case involves two assistants who worked directly for Le Pen, Thierry Legier and Catherine Griset.

A similar OLAF case targets Le Pen's estranged father Jean-Marie Le Pen, who is also a MEP. The EU is claiming the elder Le Pen should repay 320,000 euros paid to his parliamentary assistant.

In an unrelated case, EU lawmakers last week lifted the parliamentary immunity of Jean-Marie Le Pen, a move sought by French prosecutors who want to try him for allegedly inciting racial hate.