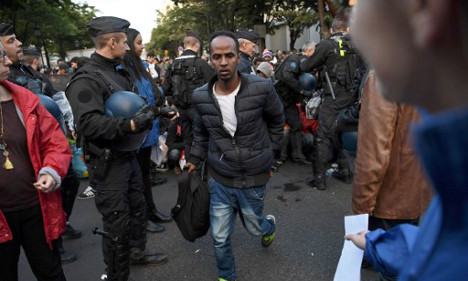 Photo: AFP
After the Calais migrant camp was evacuated last week, many migrants who weren't resettled across France descended on Paris.
Hundreds headed to a temporary camp near the Stalingrad Metro station on the edge of the 18th and 19th arrondissements of Paris, where police estimate between 2,000 and 2,500 have called home in recent days.
Early on Monday morning, police moved in to carry out an “administrative control” on the camp, which has seen tents popping up along a 700 metre stretch of Avenue de Flandre.
Witnesses reported tense scenes between migrants and police, with some social media users reporting that police resorted to using tear gas.

“What do you want ?” interpelle un migrants. #Jaures #Stalingrad pic.twitter.com/OJtEE359DB

The migrants were divided by police into those with and without papers, according to BFM TV, which reported that an evacuation was underway.
Other channels, including Le Figaro newspaper, reported that police were only carrying out checks on the migrants and that they were not yet dispersing the camp's inhabitants. Police are likely looking for numbers to ensure a smooth evacuation in the coming days to the new official camp in northern Paris.
The Stalingrad area has become a popular spot for migrants in France, and is regularly evacuated by police. In September, police moved on around 1,500 from the area.
Some at the camp have said they're planning to head back to Calais, where the giant “Jungle” camp is predicted to be totally dismantled by Monday.
“I want to see London Bridge and the London Eye,” Almas Khan, a 22-year-old from Afghanistan told The Local on Friday. “I have spent six months in a tent, either in Paris or in Calais. I have spent all my money. The French government has done nothing for us.”
His friend Almas Nazari, 32, added: “If they just gave us a home, some food, a little money, we would be happy. If they give us nothing, then we will stay in the streets.”
And as for the idea of going back to Afghanistan?
“Have you seen what is happening in Afghanistan? There is Isis, there is the Taliban. Of course we would go back if there was peace. Who wouldn't want to go back to his home country? We would all return voluntarily.”
“But for the moment it's not possible.”