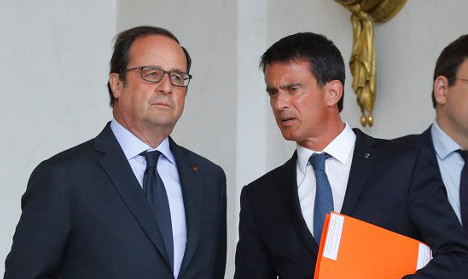 Photo: AFP
The trigger for Valls, unfailingly loyal to Hollande since taking office in March 2014, was a bombshell book on the president published earlier this month whose contents continue to reverberate.
In “A President Shouldn't Say That”, written by two political journalists after a series of interviews, Hollande is quoted criticising judges, the national football team and even his own government's policies.
Valls talked of his “anger” and the “shame” in the party last week, opening up a breach with his political master who is the most unpopular president in sixty years.
His criticism breaks with French political tradition — in which the prime minister's main job is devotion to the all-powerful president — and has led to a surge in speculation about Valls' strategy.
“I have respect for Francois Hollande, he's a friend,” Valls added on Sunday in an interview with the France 24 television channel during a trip to Africa. “I also have respect for the role.”
Is he seeking to discourage Hollande from standing for re-election, a seemingly hopeless endeavour according to the polls? Or is Valls simply distancing himself ahead of the inevitable crash?
“It's essential for Valls to differentiate himself to prevent himself sinking with the president,” analyst Bruno Jeanbart from the polling group OpinionWay wrote in Le Figaro newspaper on Monday.
Within Hollande's camp, the 54-year-old Barcelona-born premier is talked of as a possible “Brutus”, a reference to the Roman-era politician who famously took part in assassinating Julius Caesar.
“The boss, until further notice, is the president of the Republic. He was elected,” Hollande's spokesman, Stephane Le Foll, said acidly on Sunday.
A sinking president
Valls, a Spanish painter's son who only obtained French nationality at age 20, has never hidden his presidential ambitions.
In 2011, he ran in the Socialist presidential primary but scored a lowly six percent, eventually throwing his support behind Hollande and running his campaign communications.
When Hollande took office, Valls was rewarded with the interior minister's post before becoming prime minister in March 2014 when Hollande moved his government towards the political centre-ground.
“It's the first time there's a breach between the president of the Republic and the prime minister,” one Socialist MP told AFP on Monday on condition of anonymity.
“The question is who will it benefit? We'll have to watch the polls in the coming days,” he added.
Alain Juppe, a candidate from the centre-right Republicans party, is widely seen as the election frontrunner, polling around 28 percent of the vote in the first round.
He is likely to face  — and defeat — Marine Le Pen from the far-right National Front in a final second-round vote in May.
A future leader?
Analysts are still unsure of how the Socialist party will emerge from its current disarray, whether Valls will go down as a tarnished one-time PM under Hollande or reposition himself as a future leader of the party.
The premier faces multiple problems, not least his image as one of the leading figures in Hollande's unpopular government which has been ground down by high unemployment, multiple terror attacks and policy U-turns.
He began as premier as one of the country's most popular Socialist politicians, with his tough talk on crime and battles with the left-wing of the party leading to comparisons with former British prime minister Tony Blair.
He also takes a hard line on identity questions and secularism in France, supporting a ban on the Islamic veil in universities and criticising the burkini swimsuit as a “provocation.”
But in a poll published on October 26, Valls and the more instinctively left-wing Hollande would win the same vote share in the first round of next April's election, a humiliating nine percent.
He also risks being eclipsed by fellow pro-business centrist candidate Emmanuel Macron, who quit as economy minister in August to start his own political movement, and hard-left candidate Jean-Luc Melenchon.
The main question for him is “how do I get through the next stage, how do I get out of the presidential wreck to be useful afterwards?” concludes the Socialist party MP who spoke to AFP anonymously.