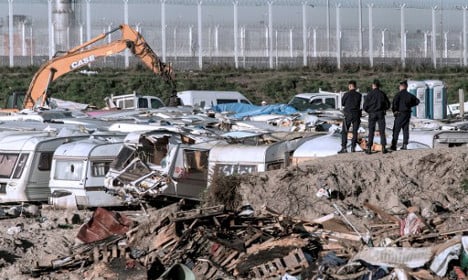 All photos: AFP
Six months before France's presidential election the Socialist government is on a drive to take migrants off the streets and transfer them to shelters around the country where they can seek asylum.
The City of Paris is to open a migrant reception centre with capacity for 400 single men in the coming days — a fraction of those seeking shelter.
On Saturday, President Francois Hollande declared that the existence of squalid settlements was “unbecoming of what a French welcome should be”. “We will no longer tolerate them,” he said, hailing the evacuation of around 5,000 people from the Jungle last week.
On Monday, diggers resumed clearing makeshift shelters from the camp which had been a home for migrants hoping to smuggle across the Channel to Britain for over a decade.
Only a few structures remained standing on the muddy stretch of wasteland strewn with the ruins of shacks gutted by the fires set by departing migrants last week.
Around 1,500 minors awaiting relocation are being housed in a on-site container park that used to host families.
Authorities said the church and mosque spared demolition in the southern part of the camp earlier this year would be preserved as long as children remained in the Jungle. The fate of unaccompanied children in the camp has caused tensions between France and Britain, with both accusing the other of failing to provide them with proper shelter.
Since mid-October, Britain has taken in over 270 children from the Jungle, mostly youngsters with relatives in Britain.
Hundreds more seeking to be transferred across the Channel are waiting to hear back on their applications.
Hollande on Saturday said he was in touch with British Prime Minister Theresa May about the need for Britain to “take its share” of the minors and that those remaining in Calais would be dispatched to other centres.
Meanwhile, Europe's refugee crisis continues to spill over onto the streets of France, with the focus shifting to the plight of hundreds of migrants living in a ballooning makeshift camp in the northeast of Paris.

On Monday, workers in white overalls backed by a digger began clearing tents and mattresses from a street in the northeastern Stalingrad district, where around 2,000 migrants have been living under an overhead metro line.
Riot police with shields sealed off the area during the operation — a prelude to a bigger effort in the coming days to clear the area, which is a long-standing magnet for the homeless in the capital.
Paris Mayor Anne Hidalgo has urged the government to intervene to give asylum-seekers a roof over their heads.
In a letter to Interior Minister Bernard Cazeneuve that was made public Monday the Socialist mayor sounded the alarm over the “dramatic humanitarian and sanitary situation” in the city's northeast.