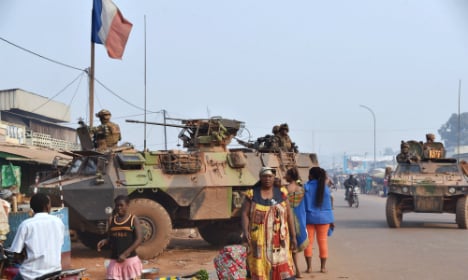 The formal end to the French mission comes as a fresh wave of bloodshed shook the troubled nation, spearheaded by rival Muslim and Christian militia groups.

“France is not giving up on Central Africa,” Foreign Minister Jean-Marc Ayrault said on Thursday, highlighting the presence of more than 10,000 UN peacekeepers from the MINUSCA mission.

But many Central Africans are worried about the departure of the French troops, who were urgently deployed following a wave of bloodshed in December 2013.

“Armed groups are getting ready. And I'm afraid they will start an all-out offensive when the French have left,” a senior political figure told AFP, requesting anonymity due to the sensitivity of the subject.

“The militias fear the French troops but not the UN force.”

In recent weeks, people have been living in fear as armed groups have resumed their acts of violence in the interior of the country, leaving dozens dead.

On Thursday and Friday alone, at least 25 people were killed, among them six members of the security forces following clashes in the central town of Bambari and the surrounding area, MINUSCA said.

Armed groups have flourished over the years given the weakness of the state.

Among the main culprits are factions from the mostly-Muslim former Seleka rebel force, and the Christian anti-Balaka militias.

But there are also vigilante groups made up of nomadic Fulani herders, who are predominantly Muslim as well as others which specialise in highway robbery.

One of the world's poorest countries, the Central African Republic has scarcely emerged from the chaos of civil war which erupted in 2013 following the overthrow of then president Francoise Bozize, a Christian, by Muslim rebels from the Seleka coalition who installed their own leader.

Christians who comprise about 80 percent of the population then organized vigilante units — dubbed “anti-Balaka” in reference to the machetes used by the rebels — which then began to target Muslims, plunging the country into a crisis.

According to Human Rights Watch, the Seleka and anti-Balaka groups committed widespread abuses against civilians, including killings, sexual violence, and destruction of private, public and religious properties, causing mass displacement.

French troops backed by a UN mandate arrived in December 2013. A month later, the Seleka president was forced to step down following massive international pressure over his failure to end the violence.

Despite this explosive cocktail, France, the former colonial power, decided earlier this year to end its mission in the country with Le Drian telling parliament earlier this month that the operation had been “a success”.

“We stopped the mass killings… allowed a process of intercommunal reconciliation, the reconstitution of the state, a presidential election, and legislative elections,” he said during a debate.

“Even if stability has not been entirely restored, it is important now… that this role be handed over to the Central African forces and the UN mission.”

Around 350 French troops, equipped with observation drones, will remain present, around 100 of whom will be deployed with the UN, the French government says.

The French operation has not been entirely smooth, with its troops coming under intense pressure since July 2014 over allegations of child rape.

Despite the troubling claims, fears of a return to violence have triggered concern among Central African civilians over the imminent pullout.

“I think there is a sense of unfinished business which risks plunging the country back into a much worse situation,” said a teacher called Edgar Ngbaba.

“I don't believe in this withdrawal at all,” said Marie Ndoinam, a trader.

And the worry of Bangui residents is only fuelled by news filtering through from the interior of the country.

According to several Central African sources contacted by AFP, several hundreds of heavily-armed Seleka gunmen from rival factions have begun gathering in Batangafo, some 350 kilometres (220 miles) north of Bangui.