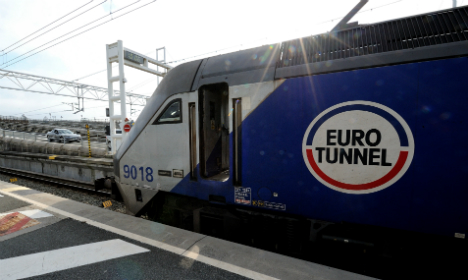 Locals say the number of British day-trippers hunting for bargains has dropped amid the influx of migrants in the city. Photo: Denis Charlet / AFP

Rather it sums up the northern French port's hopes and fears for the future following the dismantling of the notorious “Jungle” migrant camp in its backyard.

The bars and restaurants of the high street, the Rue Royale, “used to be packed with Britons,” said pensioner Michelle Toulotte in a brasserie where staff outnumbered the customers.

“It's about time” the Jungle was cleared, said Christophe Defever, owner of the Au Davydson brasserie, a stone's throw from the town's central rail station.

“The economy has really suffered since they've been here,” he said. “It's easier to count the shops that are closed than those that are open.”

While a quick tour of the city centre revealed that to be an exaggeration,the shuttered Le Tub disco in the Rue Royale attested to a more vibrant past.

The economy of Calais, a town of 72,000 people that has long a beacon for British day-trippers hunting for a bargain, began to slump early last year when thousands of migrants converged on France's northern shores, bent on reaching Britain.

In June, the Brexit vote in Britain, which was followed by a slump in the value of sterling, also dented business morale.

Real estate demand has soured, especially among investors, according toEvelyne Duriez, an estate agent in the high street.

Media accounts of the crisis have “disfigured Calais' image” and scared off investors, Duriez said, while noting that the property market has remained relatively stable for transactions between locals.

But sheer geography is a constant minus, she said: “I'm sceptical about the apres-Jungle because Calais is still the closest point” between French and British shores, tempting migrants to sneak onto cross-Channel trucks and trains.

The economic downturn prompted a high-profile protest in September when truckers and farmers blocked the main routes in and out of Calais to call for the Jungle's closure.

Under pressure from a Calais business collective, regional authorities agreed to boost the police presence on the motorway and to rapidly dismantle the lawless shantytown.

A barman said appeals for tax breaks and other relief had fallen on deaf ears. “The government has completely ignored us,” he said on condition of anonymity.

But he said the city, which has a centre-right mayor, “can't do much” while Socialists are in power in the central government.

Meanwhile at the tourist office, bilingual brochures abound extolling the town's attractions, from its quirky neo-Renaissance city hall to an impressive museum devoted to the region's lace industry.

'Shop Till You Drop'

“A Great Day in Calais” and “Shop Till You Drop” were among the headlines in a newspaper-style promotion recently created by the city.

The regional newspaper La Voix du Nord reported that President Francois Hollande may visit Calais next week to mark the shutdown of the Jungle.

The success of the operation is crucial for the deeply unpopular president,who has yet to announce whether he will stand for re-election next year.

A barman in the Rue Royale was magnanimous, except when it came to Hollande.

“May the apres-Jungle be beneficial for everyone,” he intoned. But regarding Hollande's mooted visit: “May he stay home.”

Taxi driver Herve Legrand said his business has broken even thanks to the intense media focus on the Jungle crisis.

“Maybe we lost tourists, but we gained journalists” as clients, he said.