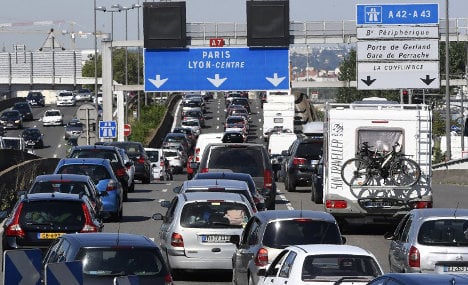 Photo: AFP
The November 1st Toussaint (All Saints) holiday falls on a Tuesday this year, meaning many workers will take the Monday off for a four-day weekend – known as a “pont” (bridge) in French.
And early signs are looking good for a tourism sector that's been struggling in the wake of numerous terror attacks in France.
READ ALSO: In numbers: How tourists are deserting France In fact, 25 percent of the French are expected to enjoy a holiday this weekend, and 80 percent of these holidayers will stay in France, according to Protourisme.
This comes after tourism chiefs were worried that families wouldn't venture away over the period due to a controversial reshuffle in the two-week school holiday saw it begin and end in the middle of the week.
However, signs are looking positive. Brittany, Normandy, and Limousin have all seen a 66 percent increase compared to last year, reported Europe 1.
Cottages across France (known as gites) have seen a 12 percent increase in bookings.
Train carriages are pretty much booked out for those heading to Marseille and Montpellier, lines that have seen a three percent increase in passenger traffic compared to the same time last year, the channel reported.
French travel booking website Weekendesk said it had doubled its sales for the long weekend, noting the most popular getaways were Mont-Saint-Michel in the north and a Paris river cruise. And the weather is going to be exceptional, at least by late October/early November standards.
Weather agency Météo France has predicted clear and sun-filled days pretty much across the board.
The southern reaches of the country, as usual, will see the warmest weather, where temperatures are forecast to reach the low 20s over the weekend. Monday afternoon/Météo France
The rest of the country will be almost unreservedly cloud-free as temperatures hover between 10C and 20C.
And just while it all sounded too good to be true, be warned that the roads will be somewhat busier than normal.
French road traffic company Bison Futé has issued a red alert for the greater Paris region on Friday for outgoing traffic, while the rest of the country is on an orange alert.
While the weekend and Monday are forecast to be fine on the roads, return traffic on Tuesday is predicted to be slower than normal, with Bison Futé issuing a nationwide orange alert.