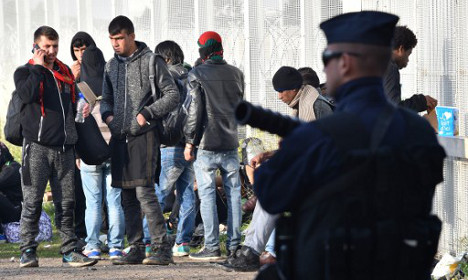 Photo: AFP
It may look like a wasteland, but it's still the closest pit stop to England.
The Calais migrant camp – known as the Jungle – has been emptied of its thousands of inhabitants since Monday, but up to 3,000 remain in northern France after being dispersed.
Many of those who have remained in the area near the Jungle itself are unaccompanied children.
And over the past few days, their numbers have started to grow as migrants have arrived after passing through countries like Germany.
“My friend said: Come on, we're going to Calais,” an Afghan called Hashmat told the channel as he arrived with five migrants, all from Afghanistan.
“We took a train and a bus to get here, and tonight we will sleep near the Jungle. Today, tomorrow, or the day after we will try and get to England,” he said.
Others however, like Mohammed from Sudan, have given up on their hopes of crossing the Channel and plan to return home, despite the risks.
“The English don't want refugees, I'm really sad. I don't know what I am supposed to do. I will return to my family. If I die, I die. Many other migrants before me have died. I am going home, it's my destiny,” he told the channel.
'2,300 to 3,000 Calais migrants dispersed'
Samuel Hanryon from Médecins sans Frontieres, which is working with the migrants in Calais told The Local: “The people who want to go to the UK, because they have a mother, father, brother or cousin, especially young people, will continue to come to Calais.
Hanryan says the charity sees the closure of the Jungle as just the end of another stage in the ongoing story of the migrants crisis in Calais, that dates back over 15 years.
“What happens next will depend on what the government in France and the UK do once the media attention has died down.”
On Wednesday top regional official Fabienne Buccio announced the end of the evacuation, saying a “page has been turned” for the camp that had become a symbol of Europe's migrant crisis.
Buccio said “at least 6,600” would have left the camp by the end of Wednesday, most boarding buses to head to shelters around France.
On Thursday she said those left in the camp had come from “Germany, Paris and elsewhere” and that registrations for transfer to other parts of France had closed.
Aid agencies however claimed as many as 2,000 to 3,000 migrants from the Jungle had been dispersed to anywhere between Paris and the northern port town.
This group is made of many migrants who have either had their asylum applications rejected or registered in another EU country and therefor face deportation.
They still have their sites set on making it to the UK.
On Thursday demolition crews continued to tear down the tents and makeshift shelters that had sprung up in the Jungle over the last 18 months.
The mayor of Calais, Natacha Bouchart, said claims of the Jungle's demise were “premature” and demanded “guarantees” that it would not spring up again, once the police had left.