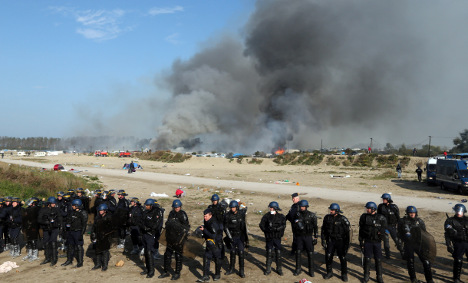 French authorities say they've cleared the Calais migrant camp known as “the Jungle,” days earlier than planned, but their claims were quickly ridiculed by journalists at the scene.

A local official in the region, Fabienne Buccio, said Wednesday that the mission has been accomplished.

Buccio said “there are no more migrants in the camp. Our mission has been fulfilled.”

She initially said the camp would be cleared by Wednesday evening.

Journalists at the scene reported that police were blocking their attempts to enter the camp to see if it was empty.

Do not listen to reports saying the #calaisjungle is clear. It's not. People with no other options are back in the camp now

@guardiannews @guardian This is not the case, police cleared a section to put out fires. #calaisjungle is still there. Residents return. pic.twitter.com/ZvXAlHN12o

The authorities claim that #calaisjungle is empty are wrong. We're live there now. People inside. @HelpRefugeesUK & others are right. pic.twitter.com/olGZmMuKKm

Authorities moved fast after migrants set fire to shelters and tents in the camp in northern France before being forced to leave.

Huge clouds of black smoke billowed over the sprawling settlement on Wednesday afternoon.

This is the scene from the bridge overlooking the camp: #CalaisJungle pic.twitter.com/KN9Wgz177b

Scores of people escaped to an area just outside the camp. Police barred them from going back in and they were seen on the road, some carrying backpacks and suitcases.

Around half of the camp's estimated population of 6,000 to 8,000 migrants have been transferred out since Monday, boarding buses to centres around France.

Many fear that hundreds of migrants have simply moved off to other camps or set up news ones and will soon return to the site of the Jungle once the police and journalists and pulled back.