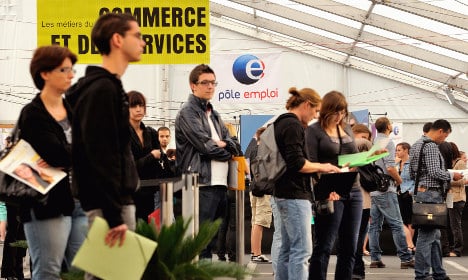 In a rare piece of good news seized on by embattled President Francois Hollande, France recorded its sharpest drop in
unemployment for 20 years in September, the labour ministry said Tuesday.

It said 66,300 fewer people were looking for work last month, bringing the jobless total to 3.49 million in mainland France and more than erasing August's increase in job seekers of over 50,000.

The total sneaked under 3.5 million for the first time since January 2015

Hollande, who has said he will not stand for re-election in April if he has not made a “credible” dent in unemployment, hailed the figures, saying they reflected a “general trend”.

“These results are the fruit of the government's efforts through the Responsibility Pact,” he said on his Facebook page, referring to a 2004 accord with business under which the government cut payroll taxes in return for commitments from employers on job creation.

It was the largest monthly drop since 1996 when the government started its current method of tracking unemployment.

In percentage terms, September's 1.9 percent drop was the largest since November 2000.

“The battle is not over,” said Hollande, who will announce in December whether he will seek a second term.

“Unemployment remains too high and job insecurity remains a daily reality for too many of our citizens,” the Socialist leader said, adding that his aim is to strengthen economic growth “without calling into question the principles of our social model.”

France's unemployment rate is stuck at around double that of Germany or Britain, hovering around 10 per cent.

The government said the jihadist attacks in Nice and Normandy in July, which led to a significant fall in tourism, were partly to blame for August's jobless increase,