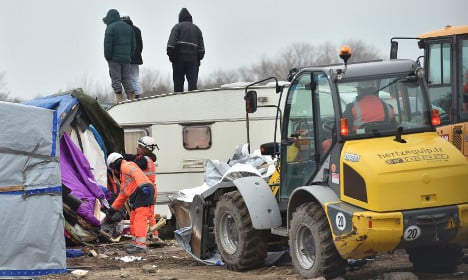 Ahead of the operation to knock down the squalid slum, hundreds of migrants were queueing up in the pre-dawn darkness for buses to take them to housing sites around France.

“Bye Bye, Jungle!” one group of migrants shouted as they hauled luggage through the muddy lanes of the shantytown where thousands of mainly Afghans, Sudanese and Eritreans had holed up, desperate to sneak into Britain.

Interior Minister Bernard Cazeneuve said Monday that 1,918 migrants had left Calais on buses bound for 80 reception centres across France under a heavy police presence. In total some 2,300 Jungle residents, including 400 minors, were moved out of the camp on Monday.

“We don't know yet where we are going, but it will obviously be better than the Jungle, which was made for animals not humans,” said Wahid, a 23-year-old Afghan.

Police at one point intervened to break up a scuffle but Cazeneuve said the operation proceeded in a generally “calm and orderly manner”.

The Jungle's hundreds of unaccompanied minors have been the main focus of charities' concerns. In an eleventh-hour gesture, Britain has taken in nearly 200 teenagers over the past week, mostly children with relatives there, but the transfers were on hold Monday.

Hundreds more have been interviewed by British immigration officials and many are still awaiting a reply.

Some 400 youngsters are being provisionally housed in shipping containers in a part of the Jungle where families had been living.

Cazeneuve said all unaccompanied minors “with proven family links in Great Britain” would eventually be transferred from the Jungle across the Channel.

British interior minister Amber Rudd said London was contributing up to £36 million (40 million euros, $44 million) towards the operation to clear the

Over the past year, police have battled near-nightly attempts by migrants to climb onto trucks heading across the Channel.
The redistribution of the migrants is a risky enterprise for Socialist President Francois Hollande, six months before elections in which migration will loom large.
Some have opposed plans to resettle asylum-seekers in their communities.
In the eastern village of Chardonnay — known the world over for its namesake grapes — the two dozen young Sudanese asylum seekers arriving Monday were met with suspicion. (AFP)
Locals watched from a distance as the men got off the bus in the village, which will eventually host 50 asylum seekers compared to a population of just 200 villagers.
“This massive arrival of migrants, it's inappropriate,” fumed resident Joelle Chevaux, out walking her dog.
But in other towns people gathered to welcome the new arrivals, with some 200 pro-migrant protesters turning out at the interior ministry in the capital chanting “Paris, Calais, solidarity!” and 250 in the city of Nantes, according to police.
French authorities say those who agree to be relocated can apply for asylum in France. Those who resist face possible deportation.
Jean-Marc Puissesseau, chief executive of Calais port, told Britain's BBC radio he was “a very, very happy man” and hailed an end to the “constant stress” of drivers fearful of being ambushed by migrants.
Dozens of people have been killed on the road or while trying to jump onto passing trains.
Puissesseau warned that new camps would sprout up around Calais unless police remained vigilant.