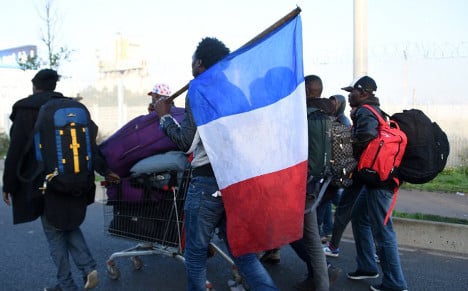 Some 8,000 to 9,000 migrants who had spent months, even years in the squalid Calais Jungle camp are being bussed around France to begin the next stage of their European journey.

While many refuse to give up on the hope of a new life in the UK, the majority seem ready to claim asylum in France.

French authorities have promised to deal with applications quickly but it will be a long process before those fleeing Sudan, Eritrea, Ethiopia, Syria and Afghanistan settle down in France.

Here’s a look at the main issues, with the help of Christopher Harrison from France Terre d'Asile, a charity that works with refugees and asylum seekers. Those leaving Calais on official buses are being taken to “Reception and Orientation Centres” (Centre d'acceuil et orientation, CAO) where they can reflect on what they want to do next.

Although there is no maximum time limit on their stay, it is not meant to be permanent. Officially those that decide to seek asylum in the hope of being given refugee status should be moved to a special reception centre for asylum seekers known as a CADA.

The CADA is designed to offer asylum seekers help with their demand whether it be administrative of language assistance. However there is nowhere near the capacity required to cope with all those migrants from Calais.

If an applicant is granted refugee status they are expected to move out within three months and find their own accommodation. Those who are rejected also have to move out and may face deportation from the country.

The status of a refugee in France leads to the automatic granting of a residence permit that is valid for 10 years. This is also given to the refugee's partner and children. However France could also hand out “subsidiary protection”, which would only allow a one-year stay. Many who receive this subsequently appeal and in the hope of being granted full refugee status. In theory asylum seekers have the right to demand lodging in various emergency centres, but in reality a shortage of options and high demand means many are left without a place. Those unlucky ones are forced to either live with friends or on the streets. Many of those who lived in the Jungle in Calais were seeking asylum in France but had no lodgings.

Asylum seekers are not allowed to work in France until they have been given the right to stay. However there is a rule that states those seeking asylum who have been in France for one year can work, but they must apply for special authorisation.

France Terre d’Asile’s Harrison says that while in theory asylum seekers can work after being here a year, the reality is that it's very hard to get the authorisation.

“A lot depends on where you live in, because it is the departmental authorities that will rule over your application. Much will also depend on the competencies of the asylum seeker,” he said.

Those who are successfully granted refugee status can look for a job right away, though in reality language problems may act as a barrier to many.

Right to move around Europe?

Officially asylum seekers are not allowed to move around Europe and should seek asylum in the country of arrival, however this has proved impossible to enforce. In July the EU introduced stricter rules warning asylum seekers their applications would be automatically rejected if they moved around, meaning they would face deportation.

If someone is granted refugee status, then they can travel around the EU as a tourist for a maximum of 90 days. After which they must apply for a visa. Anyone who is granted refugee status can have access to the basic RSA (Revenue solidarité active) benefits and family allowances if a demand is made within two years of arriving in the country. Payment is given retroactively. The amount of money received depends on the family situation on the applicant but the minimum amount paid out to one adult is €524 a month.

For those who have lodged an asylum application they can receive a small daily allowance of around €6.80 a day for individuals or €10.20 for couples. This daily allowance stops if they are granted refugee status.

The migrants are granted health cover, which is paid for under the AME (Aide Medical d’Etat) scheme, which is reserved for those foreigners effectively living illegally in the country. Once they have officially obtained asylum they benefit from universal cover (CMU) which basically means they can visit doctors and hospitals without being forced to pay up front.

Despite language being a major barrier to integration and employment, asylum seekers currently have no automatic access to language classes paid for by the state. However several charities and even charitable individuals offer lessons on a voluntary basis. In Place Stalingrad in Paris the charity Baamasso has been hosting open air classes for hundreds of migrants (see photo below). Right to apply for French Nationality

Anyone who is granted refugee status in France can in theory apply for French nationality, without having to wait a minimum number of years, as is the case for EU nationals for example.

But there are obstacles to gaining nationality that make it hard for refugees to obtain it unless they have been here a number of years. To gain French nationality you have to prove you are integrated and have a certain command of the language as well as a job, criteria that many new arrivals do not fulfill.

Children of refugees and asylum seekers have the right and indeed even the obligation to attend schools in France. So we can expect those children photographed arriving from Germany last week to be in French schools within a matter of weeks or months, Harrison says.