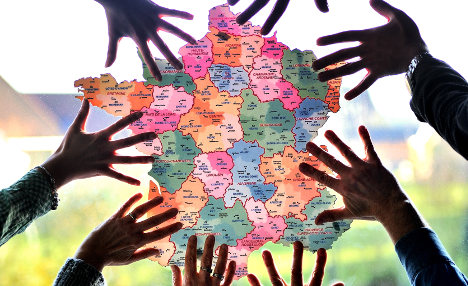 Photo: AFP
Monday morning saw the beginning of the evacuation of the Calais migrant camp, which has been home to around 6,000 to 8,000 people.
The vast majority of these residents are being sent somewhere in France, with around 2,500 in the process of being bussed out on Monday. Hundreds are also expected to resist being moved and are likely instead to stay in the Calais area.
But the operation is expected to be completed by Wednesday.
It's understood that the 1,300 minors in the camp will be given an additional 15 days before being sent off, while they learn if they can be sent to the UK as around 200 others have in the past week.
Leading up to the evacuation of the camp, the migrants were told to choose two regions in France where they would prefer to head, something authorities will try to take into account. (AFP)
So where are all the migrants going?
To all corners of France. The first coachload carrying 50 Sudanese left at about 8:45 am on Monday heading for the Burgundy region of east-central France.
In all the migrants will be sent to 451 reception centres across France, 287 of which opened especially for this evacuation.
These reception centres will on average take in around 20 people, with a total of 7,585 beds on offer around the country, according to La Cimade refugee association.
Specifically, here's how France's regions are helping out. The Interior Ministry noted that 60 percent of these centres had space for fewer than 20 migrants, and only three of them can house more than 50 people.
Three in every five of the centres were located in towns with populations larger than 30,000, and the average migrant costs €25 per day when living in such a centre, the ministry added.
An interactive map published in Le Parisien newspaper showed a more detailed map of the the spread of the centres.
The map reveals exactly how many migrants will be sent to each commune, although the exact addresses of the centres aren't given.
The map is based on unofficial information from Cimande, gathered by other aid groups and local newspapers. The information hasn't been confirmed by the Interior Ministry.

Click the map below to see the interactive version.