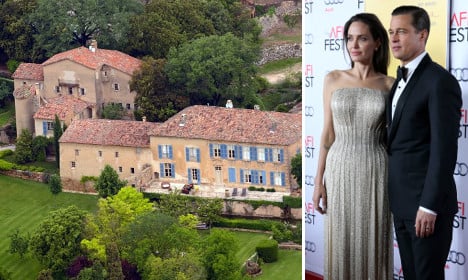 All photos: AFP
The pair are working their way through divorce proceedings after Jolie filed for a split in September.
And now the A-listers are preparing to say au revoir to their chateau, reported US Weekly publication. The Chateau Miraval estate, located in the Var department of southern France, was a summer base for Jolie, Pitt, and their six children.
Jolie and Pitt acquired the 500-hectare (1,200-acre) estate in 2008 for around €40 million ($52 million) and got married there in August 2014. And it's an impressive residence, boasting 35 rooms, massive gardens, a chapel, a mote – and 50 to 60 acres of vines.
In 2013 The Local reported how Pitt and Jolie's dip into the wine trade got off to a roaring start when the first 6,000 bottles of their French Miraval rosé wine sold out within hours of going on general sale. A source told US Weekly that next year's batch of the wine won't have the “Jolie-Pitt” name attached.
Besides being home to Jolie and Pitt, the residence also has a famed recording studio that has been used in the past by Pink Floyd, Sting, and The Cranberries.
It remains unknown when the chateau will go on the market, and how much it will be sold for.