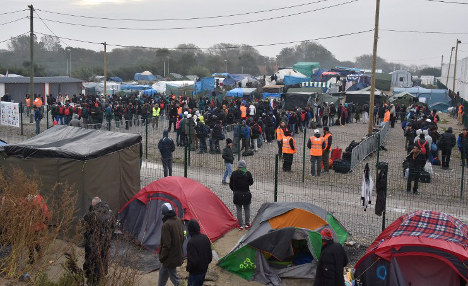 France hopes the clearance of the squalid Jungle migrant camp in Calais will close a sorry chapter in the country’s migrant crisis, but it is unlikely to be the end of the story.

And what chance of a happy ending?

On the day of the clearance there was an estimated 6,000 to 8,000 migrants in the Jungle camp. At around 8.45am the first bus pulled away carrying around 50 Sudanese refugees to a reception centre in Burgundy.

Over the next three to four days scores of buses will take the thousands of other refugees to some 450 reception centres across France.

Some migrants say they are refusing to budge hence the presence of scores of baton-wielding police. But many also predict a significant number of those who have been bused to Burgundy and beyond will simply make their way back to Calais once the riot police and the journalists have moved on.

“After a week everyone will be back to create a new Jungle. We just don't know where yet,” one young migrant told BFM TV on Monday. How many will head back to Calais?

A wall, stretching one kilometre long and four metres high is currently being built along a stretch of the motorway leading to the port that passes by the Jungle camp. Britain would not have agreed to pay for its construction if authorities really believed the clearing of the Jungle would end the crisis in Calais.

Charities and aid associations say many of those who have been moved out of Calais in previous months, have only returned to the northern port town, so there is no reason to believe anything will be different after this week's official clearance.

They simply refuse to give up on their dream of reaching the UK and Calais, where thousands of lorries that cross to the UK via boat or the Channel Tunnel will remain the best place to risk their lives in the hope of crossing.

Much too will depend on what services are on offer to migrants in the small towns around France. No translators, no friends

“They find themselves in a department of France where there are no real translators,” Anne-Lise Coury, head of operations for Medecins sans Frontieres in Calais, told The Local recently.

“They can end up far from a town and the administrative offices they need,” said Coury.

“They may be also far from places where they can learn French, or from members of their community,” she added. “And they end up just deciding to go back to Calais.”

The reception they receive will also play a role. The build up to Monday's clearance has seen several reception centres attacked by arsonists and one was sprayed with bullets. And locals in some towns have held anti-migrant protests.

But there have also been pro-migrant protests and much support offered to new arrivals.

While the government insists Calais' migrants crisis is France's problem, the reality is many concerned people in towns across the country, not least the far-right mayor of Beziers, would rather it was just a conundrum for Calais. More camps around the area?

There is also evidence that migrants will just set up other smaller camps around the Calais region or head to another more established shanty town like The Grande Synthe, near Dunkirk.

A Syrian migrant named Sam told AFP that “dozens” had left the Jungle early to avoid being sent elsewhere in France.

“I have been in the Jungle for 13 months and during this time I have learnt not to trust the authorities. So last night I left the Jungle and pitched my tent in another place nearby,” about a dozen kilometres away, he said.

There has been growing evidence that people traffickers have been targeting UK-bound lorries in motorway rest areas well before they reach Calais. The A1 motorway north may soon be dotted with mini-Jungles at strategic points where traffickers believe they can get migrants on board the lorries.

There are also fears that the closure of the Calais camp will just shift the crisis to other ports along the northern French and Belgian coast. Other Channel ports to come under pressure?

After the closure of the southern part of the Jungle earlier this year, there were reports that the number of attempted illegal ferry crossings at ports such as Ouistreham and Dieppe rose dramatically.

But with the Jungle being completely dismantled the shift could be even greater this time and French authorities and the UK might have to start strengthening security and building four-metre high fences at other Channel ports.

For many migrants however the clearance of the camp could be positive. London says it is willing to take in scores of unaccompanied refugee children. Some have already arrived while others be shipped or put on a train to the UK in the coming days.

And for the many who do want to stay?

Hundreds of migrants headed to Calais in recent months just to be there for the official evacuation.

They are the ones who have decided that being moved to a reception centre in rural France is better than risking their lives each night to get to the UK. “Anywhere in France would be better than the Jungle”, said one Sudanese migrant on Monday as he boarded a bus to Burgundy.

Aid associations say a growing number of migrants have decided to seek asylum in France.

Pascal Brice, head of the Ofpra asylum agency, said his staff were trying to convince migrants that their asylum requests in France would be processed “very quickly”.

Around 70 percent of migrants evicted from other camps in Calais in the past had been given French residency, he said.

And what will become of those migrants who are given asylum? For them the task of learning French and trying to find work and permanent lodging won’t be easy in a country with record unemployment and not a great record of successfully integrating immigrants.

But charities are doing their best to help them, as seen by the open-air French lessons in Paris.

The challenge of settling in France is one that many will gratefully accept given what they have already gone through to get here. (Around 100 migrants learn French in Paris. Photo: The Local)