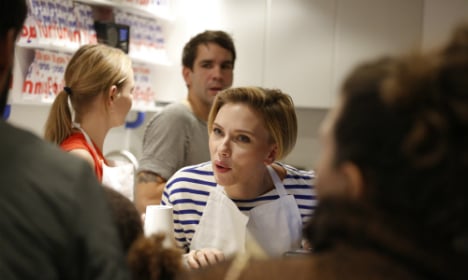 The “Lost in Translation” actress — decked out in a classic French blue and white striped top — dished out the crunchy treat to punters at the launch of the Yummy Pop store she and husband Romain Dauriac have opened in the city's trendy Marais district.

The couple hope their unusual twists on the classic cinema snack –including the 31-year-old “Avengers” star's favourite truffle, parmesan and sage flavour — will wow customers in the gastronomic capital of the world.

Ahead of the launch, Johansson's spokesman in Los Angeles said the she was passionate about popcorn, adding that it was cooked and mixed fresh on the spot with seasonal ingredients.

After Saturday's soft launch, an official grand opening is planned for a later date.