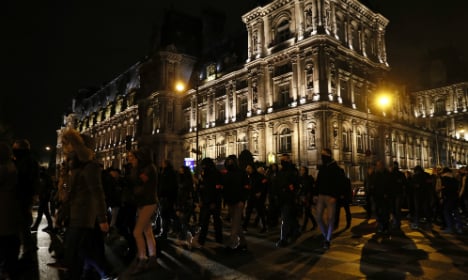 French police officers on Saturday demonstrated for the fifth night in a row to protest mounting attacks on officers. Photo: Thomas Samson / AFP

The frustrated officers want reinforcements and stiffer penalties after a string of attacks on law enforcement, as the issue of safety feeds into France's looming presidential race.

The fifth night on Friday saw people applaud them, recalling the night in January 2015 when some four million people marched through Paris in a show of solidarity against terrorism.

Police wore orange armbands, as they walked along the Rue de Rivoli in Paris lit up by the headlights of cars halted by their demonstration, rallying from City Hall to the Place de la Bastille.

“We've had enough!” they shouted, calling for more resources and tougher penalties for those who attack police, 13 days after four of their colleagues were attacked in Viry-Chatillon, south of Paris.

Car horns or bicycle bells of support from the public blended into the sound of foghorns and whistles blown by the protesting officers, dressed in their civilian clothes.

Gone midnight, revellers poured out of bars onto the pavements — to raise a glass to the demonstrating police, and cheer them on.

“Bravo!” comes from a window up above. Those protesting looked up and applauded them back.

The opening notes of the Marseillaise struck up from one cafe terrace, and everyone joined in with the French national anthem.

The scenes were reminiscent of the mass march on January 11 last year, a few days after the deadly attack on satirical weekly Charlie Hebdo and hostage-taking at a Jewish supermarket.

Nearly four million people took to the streets of Paris to show their defiance in the face of terrorism, and voice support for police and security forces on the frontline in protecting the public.

Twenty-one months later, the list of police complaints is long, covering everything from an ever-increasing workload, bureaucracy, outdated equipment and what is seen as lenient sentencing for violence against officers.

The frustration has been building for some time, fed by long-standing problems of criminality in the country's rundown suburbs but boosted by the sense of insecurity in France.

Prime Minister Manuel Valls on Saturday expressed his “support” for the police officers, as the government sought to assuage their anger.

Meanwhile in Evry south of Paris, some 80 police officers and their families protested outside the town hall, demanding “more resources and respect”.

Some of the children at the protest wore a police cap, while others carried banners that read: “I support mum and dad”.

The spark for this week's demonstrations, organised by the rank-and-file rather than union leaders, was several petrol bombs thrown at officers in a known troublespot outside Paris on October 8.

“The people with us!” and “The people support angry police”, chanted the protesting officers Friday, visibly moved by the demonstrations of support and sympathy for their cause.

The crowds applauded every police van, every blue flashing light and every siren. Motorists rolled down their windows to thank them, some flashing a V for victory sign.

Not everyone agreed: at one point two young men shouted at the police using crude language. They were surrounded by a group of officers and there was a brief altercation, before a policeman took to a megaphone, saying “Keep calm, be professional”.

“I was surprised to see lots of people supporting us… I thought there would be more signs of hostility,” said one 25-year-old officer who declined to give his name. “People have really understood what has been happening.

They've seen what isn't working with our public services.”

Arriving at the Place de la Bastille, the protestors stayed together for a short time before dispersing to have a last drink and sing the Marseillaise once more.