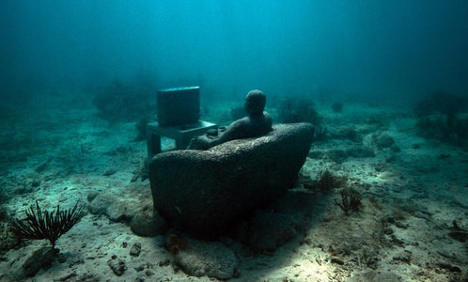 A similar underwater museum piece by Jason deCaires Taylor. Photo: julie rohloff/Flickr
The underwater museum, which still needs approval, would feature a series of sculptures on the sea bed and is inspired by a similar attraction in Mexico.
Entry would be free, but you'll have to be ready to put on some diving gear (and take lessons if needed) and swim eight metres down to the seabed to admire the sculptures.
The director of the association which is behind the project, Antony Lacanaud, wants to combine his passion for contemporary art and the aquatic world.
He's inspired by British sculptor Jason deCaires Taylor, who opened the world's first underwater museum in Cancún, Mexico, in 2009. Taylor has shared his support for the project and plans to display 15 sculptures in the Mediterranean sea.
“Our aim is to increase what's on offer for tourists,” Lacanaud told the 20 Minutes newspaper.
“Anyone will be able to visit it, although we'd like to develop a system whereby visitors sign up beforehand,” he said.
All in all some 45 works will be displayed by a various artists.
Over time the sculptures, which are made out of a special cement that does not harm the ecosystem of the water, become part of the ecosystem, as underwater plants and animals make it their new home.
If all goes to plan, the museum would be conveniently installed just off the Anse des Catalans, a bay right in the centre of the city (see map below). Photo: Google Maps
The association is also looking to develop ties with diving schools.
If all goes to plan Marseille's newest attraction would open on June 8th, 2017 which is World Oceans Day.
Take a closer look at the work by Jason deCaires Taylor below.
By James Vasina