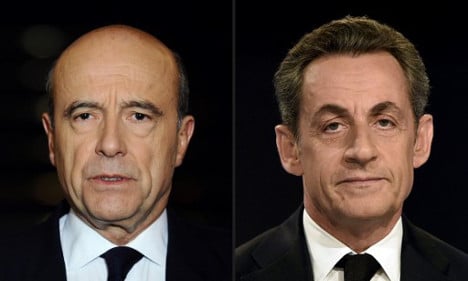 Candidates for the right-wing Les Republicains Alain Juppe and Nicolas Sarkozy. Photo: AFP
In a nation traumatised by a string of jihadist attacks, unemployment and the economy are taking a backseat to security fears that underpin populist appeals to voters.
“The right has an opportunity that owes a lot to the exceptional weakness of Hollande, and all of the left more broadly,” said Yves-Marie Cann, director of the Elabe polling agency.
Hogging the limelight are the conservative front-runner, 71-year-old former prime minister Alain Juppe, and ex-president Nicolas Sarkozy, 61, who came under attack for his record in office as he kicked off a series of primary debates last week.
The moderate Juppe is expected to beat the divisive Sarkozy for the centre-right nomination on November 27.
For now, topics such as unemployment — a crisis that Hollande, 62, has staked his presidency on — can wait, according to pollster Emmanuel Riviere.
“Nicolas Sarkozy won't try to differentiate himself from Alain Juppe on unemployment or economic issues but on identity,” Riviere said.
On that front, Sarkozy — the son of a Hungarian immigrant — drew a line in the sand by saying last month: “Once you become French, your ancestors are the Gauls.”
The polarising remark sparked a storm across the political spectrum in multi-ethnic France.
Moroccan-born Labour Minister Myriam El Khomri said the comment sounded as if it had come from a spokesman for far-right leader Marine Le Pen.
It was a line straight out of the nationalist playbook of Le Pen, 48, whose National Front (FN) has co opted French folk heroine Joan of Arc as a far-right icon.
Le Pen, boosted by anti-immigrant sentiment following the jihadist attacks and the Europe-wide migrant crisis, styles herself as the “people's candidate”.
Unopposed on the far right, she enjoys some 30 percent support — up from her score of 18 percent in 2012 — and is tipped to make it to the second-round run-off for the presidency on May 7.
Her father Jean-Marie Le Pen achieved the feat in 2002, going on to lose to the conservative Jacques Chirac.
Juppe's 'happy identity'
Marine Le Pen's most likely opponent is Juppe, who is courting the centre as well as the left with talk of a “happy identity” that refuses to “give in to fear”.
Juppe says France's five million-strong Muslim minority — Europe's largest — should not be stigmatised.
Not until the dust settles from the right's nominating contest will Hollande, France's most unpopular postwar president, announce whether he will run again, in early December.
And even then Hollande would have to run the gauntlet of a left-wing primary in January, unprecedented for an incumbent president.
Whoever emerges as the left-wing nominee is given no chance of getting past the first round of the presidential vote on April 23.
If Hollande does run — and a tell-all book published last week unleashed rumblings that he has lost all appetite for the job — observers say he would prefer a rematch with Sarkozy, whom he dispatched from the Elysee Palace in 2012, over a duel with Juppe.
“If Sarkozy wins it (the conservative primary), the Socialists will come together to block his return. If it's Juppe, many of them will look for someone (besides Hollande) who can be the face of the opposition,” Riviere said.
The ever-present threat of new jihadist attacks hangs over the identity politics.
Le Pen, who has expressed admiration for US Republican presidential candidate Donald Trump, said in the wake of the Bastille Day truck massacre that killed 86 that successive governments had been at fault for “continuing to allow so many foreigners into France”.
The summer saw a highly politicised debate over the Muslim body-concealing burkini swimsuit, which Sarkozy called “medieval”, with a string of coastal towns imposing a short-lived ban on the costume.
Sarkozy said the question is not whether but when the next attack will be and vows a “merciless” fight against the Islamist extremists who have killed 238 people nationwide since January 2015.
'Humiliating'
Hollande's staunchest supporters say he would be a rampart against populism.
But he faces strong headwinds when the discussion turns to his economic record, with growth still sluggish and unemployment stuck at around 10 percent.
Hollande's Socialist team has been frustrated in its efforts to combat joblessness and respond to EU pressure to bring down France's ballooning budget deficit.
The government faced months of often violent street protests before getting through a watered-down labour law.
Hollande's torment is palpable in the book, titled “Un president ne devrait pas dire ca…” (“A president shouldn't say that…”).
“It's true it could be humiliating to lose when you're the incumbent,” he was quoted as saying. “But it's also humiliating to say to oneself, 'I can't do it'.”