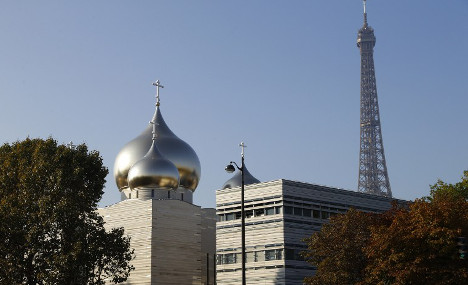 Putin last week pulled out of a trip to open the complex, which includes a spiritual centre and school as well as the cathedral, after fierce criticism from France of his bombing campaign in Syria.

The buildings, at a prime location by the river in central Paris, have raised eyebrows, with the five giant golden domes of the cathedral clearly visible in the historic heart of the City of Lights.

The project also reportedly sparked concerns from France's intelligence agencies because of its proximity to nearby government buildings, including the foreign ministry just a short walk along the Seine. Putin has given strong financial and political backing to the project which has cost more than 100 million euros. Moscow purchased the land in 2010 from the French state under the presidency of Nicolas Sarkozy.

“You could link this project to pastoral needs, but it also likely a desire by Russia to open a cultural and religious showpiece in Paris beyond its embassy,” writer and Orthodox priest Christophe Levalois told AFP.

Putin has developed close bonds with the powerful Russian Orthodox church whose patriarch Kirill has backed the Kremlin leader personally and on policies such as his military intervention in Syria. Kirill is set to visit Paris on December 4 for the consecration of the Saint-Trinite cathedral, whose interior will be fully completed in 2017.

In Putin's absence, the complex will be opened Wednesday by Culture Minister Vladimir Medinsky.

But the growing Orthodox community in France, swelled by immigration from Russia as well as the Middle East and the Balkans, is not united behind the Kremlin's construction.

Paris already has an Orthodox cathedral, the Saint Alexandre Nevsky built by the Russian community in 1861, but it is aligned with a different branch of Orthodoxy based in Istanbul — rather than Moscow which is seen as more politicised.

Antoine Arjakovsky, a historian linked to Saint Alexandre Nevsky, stressed the “strange and problematic ambiguity” of the project, financed by a theoretically secular Russian state, which “mixes religion and politics a stone's throw from the Elysee (presidential palace) and the foreign ministry.” As well as opening at a difficult time in Franco-Russian relations, it is also awkward for French President Francois Hollande amid a feverish national debate in France about the role of religion in public life after a string of attacks by Islamic extremists.

Hollande was quoted in a book last week as saying that there was a “problem with Islam” in France because it required holy sites and recognition.

“It's not Islam that poses a problem in the sense of its being a religion that is dangerous in itself, but because it wants to assert itself as a religion in the republic,” he is quoted as saying in “Un president ne devrait pas dire ca” (“A president shouldn't say this”).