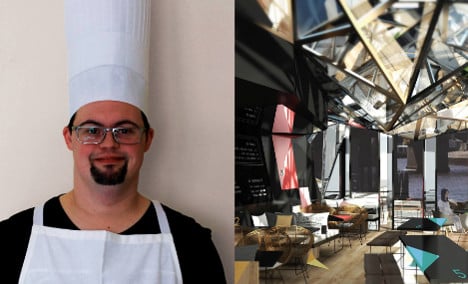 A restaurant with a difference is about to open in Nantes, western France.

The reason it is different from every other restaurant in France?  The staff members have Down syndrome.

A first for the country, which is being seen as a positive step to help the integrate those who have the condition into mainstream society.

Flore Lelièvre, the 26-year-old interior designer behind the project, said she started work on it three years ago, and has been helped by a team of volunteers for the past year and a half.

“It's been an emotional ride, lots of stress, but it's great. I'm fortunate to be accompanied by a brilliant team, a project like this could never be carried out alone,” she told The Local.

She said that her phone hasn't stopped ringing since the story was first published in the local Ouest France newspaper.

“I've had brilliant reactions from families with members who have Down Syndrome, and they are overwhelmed by the project, to see that there's finally something like this to help them to integrate into society,” she said.
Le Reflet, the name of the restaurant, will employ six members of staff with Down Syndrome – two of whom will work as chefs while the other four will be waiters.

“We call them our extra-ordinary employees. They will work alongside a cook and a manager, who will be ordinary,” Lelièvre told Ouest France newspaper.

The menus will be simplified, with three choices for each starter, main and dessert. Most of the food will be cooked in advance at low-temperature to minimise stress.

“We'll have visuals and colour codes at the tables to help employees who can't read or write to take the customers' orders,” said Lelièvre.

For those with limited fine motor skills, she has moulded fingerprints into the plates so that waiters can get a better grip but also feel more confident.

The restaurant will have a designated room for resting and the kitchen will be equipped with special seating for the cooks.

Inspired by the fact her own brother has Down Syndrome, Lelièvre began working on the project as part of her interior design studies degree.

Her aim was to create a workplace where those with the condition could be part of society, just like everyone else. Soon after, her teacher became her associate and they created an charity.

A pizzeria in Rome currently employs thirteen people with Down syndrome and is a great success.

“Someone told me it's just like any other place, except that all the waiters are friendly!” she said.