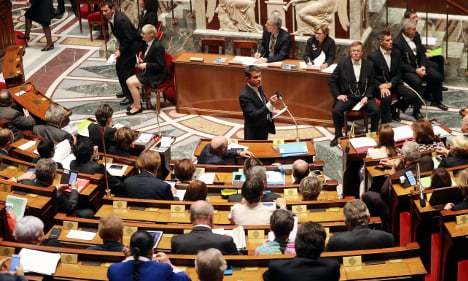 Photo: AFP
The women behind the initiative said sexist remarks and conduct were a daily occurrence in the halls of power in Paris, with recent cases documented in the media merely extreme examples of a much wider problem.
In May, one of the deputy speakers of the lower house, Denis Baupin, resigned after being accused of harassment over several decades, while minister Jean-Michel Baylet was accused in parliament last week of hitting a female colleague.
Both men deny the allegations, but the publicity surrounding the Baupin case created an opening for female MPs and their staff to speak out about the macho culture of parliament and its mostly-male occupants.
Writing in Monday's Le Monde newspaper, the four women behind the website said that “sexist language and behaviour occur on a daily basis for women in politics, whether they are elected or staff.”
Their site, Chaircollaboratrice.com, is a French pun which sounds like 'Dear co-worker' but which actually translates as 'flesh of my co-worker'. It already hosts several anonymous testimonies from women reporting mostly unwanted comments about their appearance or sexually charged remarks.
In one case, a woman recounted being in a meeting with an MP who broke away from official business to remark to her, “You know, it's funny, I've never slept with an Arab…”
And her reply?
“You know, it's funny, I've never slapped an MP!”
In 2015, around 40 female journalists signed a joint statement denouncing sexist behaviour by male politicians.