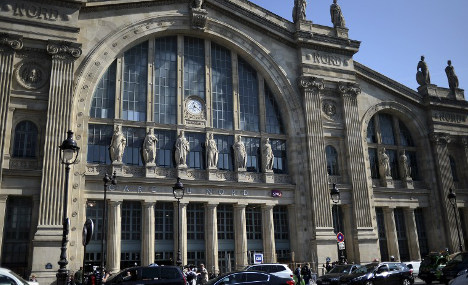 Photo: AFP
Through a discrete doorway at 4 rue Ambroise-Paré in the 10th arrondissement is a 450 square metre centre will operate as a “salle de shoot” for drug addicts when it finally opens on Monday.
It had been due to open last week, but its opening was pushed back for “practical reasons”, project backers said.
The surrounding area is already a known hotspot for drug addicts, many of whom loiter around the nearby Gare du Nord train station and often shoot up in public toilets and car parks, leaving their syringes behind on the ground.
The new centre, which cost the government €850,000, is hoped to take the drugs off the streets and provide a safe environment for the addicts.
It is expected to help 200 drug addicts a day, in a “safe” place where they can bring their own drugs and inject them under the watchful eye of healthcare professionals who'll provide sterile needles. Health Minister Marisol Touraine was at the inauguration on Tuesday last week, together with the mayor of Paris Anne Hidalgo.
Touraine said in March that the centre “in no way trivializes drug use”.
“Closing our eyes to such a reality does not remove the problem, and so France has decided to include rather than exclude,” she said.
A similar room is set to open in Strasbourg soon, and more may be rolled out to other cities as well. The centre in Paris has had a troubled history, with locals taking to the streets to protest soon after the idea was announced in 2013.
Newspaper vendor David Viallard told The Local at the time that opening such a centre sent the wrong message to children.
“You can't tell children that drugs are forbidden and then say oh here's a place where people can come and take drugs. It's like putting a bag of sweets in front of them and saying you cannot eat them. You either legalize everything or you crack down on it.”
Read more about local reactions to drug safe houses in our gallery here.