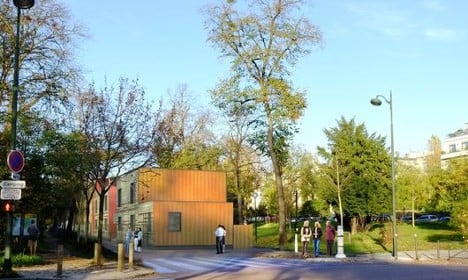 The centre was set to open in the plush 16th arrondissement of Paris, despite long-running and vocal opposition from locals.

But the opening may have to be put back after the centre was hit by a blaze overnight on Sunday, which reports say was started purposefully.

Reports in the French media claim glass from a bottle was found at the scene suggesting the fire was started by some kind of homemade device.

It was not clear how much damage had been caused by the blaze but an investigation has been opened.

Deputy mayor of Paris Ian Brossat, who is in charge of housing at City Hall, denounced a “wicked act”.

The centre, located on the edge of the Bois de Boulogne forest, was due to house 200 homeless people.

But local opposition had grown with rumours that it was actually designed to be a new reception centre for migrants. Opponents made their feelings known at a raucous public meeting earlier this year, when locals shouted “sons of bitches” and “bastards” at local councillors.

The meeting had to be cut short for safety reasons.

Many fear their house prices will tumble with the influx of 200 homeless people, while others say the area will be ruined, while some point to security concerns. Others however fear it will become a migrant camp like the Calais “Jungle”, but this time in Paris.

Françoise Gaujour, a local resident,told The Local previously she wasn’t a “rich bourgoise”, but that the centre bothered her “not because it will house homeless people… Unfortunate men and women who we obviously need to help,” but because “it will make apartment prices fall.”

“My residential apartment, which is located in this area, has already lost 15 percent of its initial value since these construction plans were announced. This apartment is my only ‘fortune’… It’s my savings.”

“In France, we know that temporary often means permanent,” she noted about city officials assurances that the centre will only remain in the area for three years.

Some 50,000 people have signed a petition against the centre.

The incident echoed recent arson attacks at reception centres across France that were designated to welcome migrants from the Calais Jungle camp.

The French government is set to dismantle the sprawling camp in the coming weeks, but there has been opposition in towns and villages across France that have been earmarked to take in a small number of migrants.