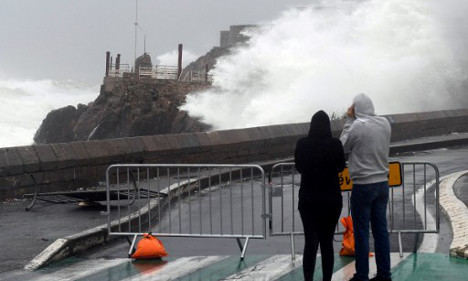 All photos: AFP
Three departments in southern France are on orange alert after weather agency Météo France predicted the “very powerful storms and violent wins” would continue.
Orange is the second highest warning level that asks the public to be “very vigilant”. The departments are Gard, Hérault, and Var (see map below), all of which are on alert until Saturday morning.
Those in the area have been warned to be vigilant with any outdoor activities, and to avoid using the telephone and electrical appliances.

Hérault had previously been on a red alert as the worst of the storm passed through on Thursday. Schools in the area have been closed as a precaution, with the agency urging the public to take preventative measures to protect houses from flooding, even if they're not situated in areas prone to flooding.
Some parts of Hérault have already been hit by 360 mm of rainfall since the storms began on Wednesday. Another 80 mm is expected on Friday.