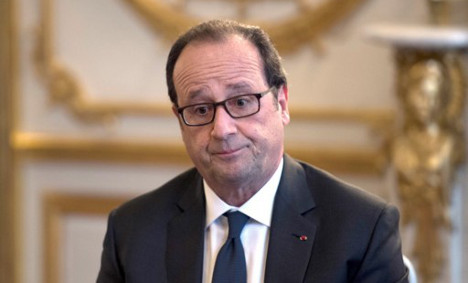 Photo: AFP
The Socialist president said he “deeply regretted” comments that upset senior lawyers and judges in a book of interviews with journalists which has wrong-footed even many of Hollande's closest aides.
Hollande described the justice system as “a cowardly institution” and accused senior judges of “keeping their heads down”.
On Friday, two days after the remarks emerged, the president insisted his comments had been misinterpreted.
“I deeply regret what has been taken as an insult by judges whose courage and devotion to their difficult work I admire every day,” Hollande said in a letter to the country's top judges.
The damage however had already been done. One of France's most senior legal officers, Bertrand Louvel, president of the highest appeal court, the Cour de Cassation, attacked Hollande's “degrading vision” of the justice system.
Alain Juppe, the former prime minister who is favourite to clinch the right-wing nomination for president in next year's elections, said the comments showed Hollande had “seriously failed in the duties of his office and showed once again that he is not up to the job”.
Ex-president Nicolas Sarkozy, who lost to Hollande in the 2012 election, tore into him in Thursday's debate of right-wing candidates, asking: “How far will Francois Hollande go in sullying the presidential office?” Openly questioned
Hollande has recorded some of the lowest popularity ratings of a post-war president after four years in office overshadowed by stubbornly high unemployment and a series of devastating terror attacks.
Despite his unpopularity, the absence of an obvious Socialist alternative to Hollande leaves the way open for him to make a bid for a second term.
He has indicated he will make his decision on whether to stand in December.
But some Socialists admitted the revelations in the book by two Le Monde journalists, “Un president ne devrait pas dire ca…” (“A president shouldn't say that…”) were a further setback for the president.
Party leader Jean-Christophe Cambadelis said he was convinced Hollande wanted to stand again but that he was “not making things easy for himself.”
A junior minister openly suggested that leftist former economy minister Arnaud Montebourg, who left the government over a disagreement with Hollande, would beat him in the Socialist nominating contest in January.
Montebourg is viewed as a maverick, but higher education minister Thierry Mandon said Wednesday: “He can beat (Hollande) because with the way French political life is breaking up… anything is possible.”
While Hollande's woes dominated the week, polls showed that in the right-wing contest Juppe had emerged from Thursday's debate with his lead over Sarkozy reinforced.
Juppe portrayed himself as above the fray while Sarkozy was forced into defending his 2007-2017 term as president in the debate which brought together all seven hopefuls for the right-wing nomination.
Some 35 percent told pollsters that Juppe was the most convincing in the debate, while Sarkozy scored 21 percent.
Because of the deep divisions within the left, the winner of the right wing primary on November 20 and 27 is likely to become the next president of France.
Polls currently show that the right-wing candidate would end up beating the leader of the far-right National Front (FN), Marine Le Pen, in the second round of the election in May.

'Path of hope'
In Thursday's debate, Juppe sought to distance himself from Sarkozy's hard-edged campaign which has seen him accused of stealing the FN's anti-immigration clothes.
“I want to lead you along a path of hope,” the long-time mayor of Bordeaux said.
Challenged about the 14-month suspended term he received in 2004 over a party funding scandal, Juppe said he could not “rewrite history”, adding: “It is up to the voters to decide if that disqualifies me.”
A visibly irritated Sarkozy meanwhile was forced on to the defensive over the various investigations in which he has been entangled since losing his 2012 re-election bid.
“After 37 years in politics my criminal record is clean,” he insisted.
By Guy Jackson