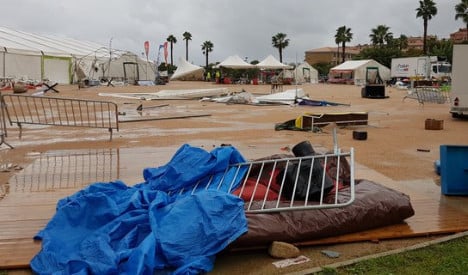 Photo: @sdis2a/Twitter
Twenty-three people were injured when a mini tornado swept over the tent in Ajaccio, rescue teams said.
Two of these people were in a condition of “absolute urgency”, firefighters tweeted.

The incident occurred on Friday afternoon while around 350 children were on the site for a cancer awareness festival.
It remains unknown if any of the children were among those injured.
Prime Minister Manuel Valls took to Twitter, below, to offer his “thoughts to those injured, their families, and the children affected”. The storm was powerful enough to tip over a trailer at the site, various channels have reported.
Dozens of firefighters were called out to the scene, where a crisis unit has been set up.
The south of France, including Corsica, has been struck by violent storms over the past two days, with several areas on alert.