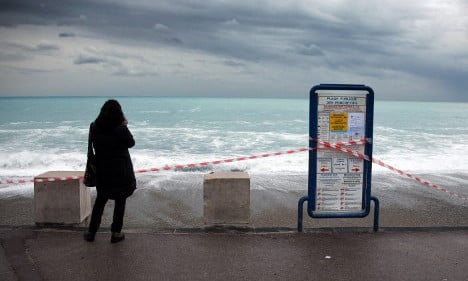 Photo: AFP
France's weather agency Météo France has placed four departments on orange alert, the second highest warning level that asks the public to be “very vigilant”.
Those on alert are Aude, Bouches-du-Rhône, Aveyron and Hérault, all of which are on France's south coast, with the warnings in place until 9pm on Friday.
The agency predicted strong storms and violent winds, and warned residents of potential basement flooding and disrupted traffic. Photo: Météo France
In Hérault, schools and colleges have been closed down as a precaution after the area was hit by particularly strong weather throughout Wednesday.
Météo France predicted that the area may be hit by up to 300 mm of rain.
In nearby Nice, the bad weather prompted authorities to postpone Friday's planned memorial for the victims of the Bastille Day attacks until Saturday.
The agency added that rough seas could prompt coastal flooding and overflowing rivers.
Those in the area have been warned to be vigilant with any outdoor activities, and to avoid using the telephone and electrical appliances.
While the rest of France will escape the floods, they won't escape the rain.

By Thursday afternoon, most of France will be under the clouds as temperatures drop to between 10C and 15C and the rain begins to fall.