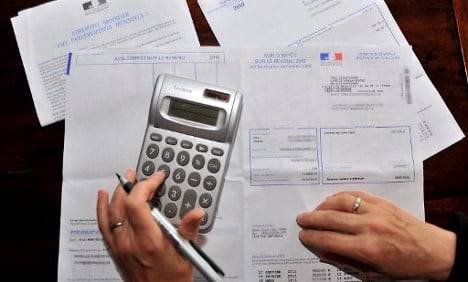 Photo: AFP
Between 2010 and 2015 property taxes in France, known as “taxes foncières”, shot up by an average of 14.70 percent.
Some areas were particularly hard hit, including Clermont Ferrand in central France with a rise of 20.29 percent and Lille in the north which saw a 19 percent increase.
While the increase might sound harsh, the French landlords union UNPI noted that it was a big improvement from the 21.17 increase between 2007 and 2012.
Thursday's report from the UNPI noted that between 2010 and 2015, inflation rose by 4.97 percent and the hourly minimum wage by 7.44 percen.
As for this year, some 35 departments saw an increase since 2015, compared to just 11 in the same report from last year.
According to UNPI, the surge in property tax rates is down to the accumulation of various increases imposed separately by regional departments, municipalities (communes) or groups of municipalities (groupements de communes).
This year home or land owners will have to pay their taxe foncière by October 17th, by either cheque, TIP payment or by cash. However for those paying on line the deadline is slightly later on October 22nd. The sum will be taken from your account on October 27th.
The taxe foncière is a property tax that is paid to the local authority, whether the commune or department and goes towards the funding of local services.
It is payable by anyone who owns a property on January 1st of any given year and is calculated on the basis of how much the property could be rented out for, multiplied by a percentage rate set by the local council. Home owners in France have to pay whether or their house is occupied or not.
The French tax man takes his taxe foncière very seriously. The Local reported recently how the mayor of the seaside town of Sarzeau said he had received a letter from the public finance offices to a dead resident, addressed to “grave 24, row E, cemetery road”.

To see UNPI’s report in full, visit their website at www.unpi.org

For more information on the “taxe foncieres”, click here.