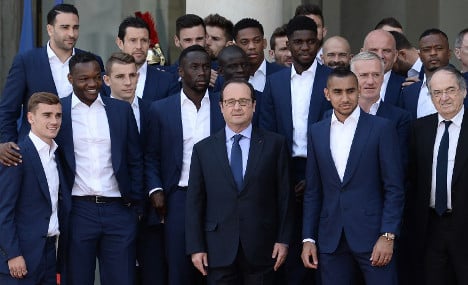 Footballers lined up to give Hollande a kick after the president’s harsh comments emerged in a new book this week.

In the book, which is based on Hollande’s conversations with two journalists, the president tackled France’s modern generation of “badly educated” football stars who are “lacking values”.

“They go from being badly brought up kids to rich stars without preparation. They are not prepared psychologically to know what is right or wrong,” Hollande said.

“The French Football Federation should not be organising training sessions but classes. Gym classes for the brain,” he added.

Former French international and World Cup winner in 1998 Emmanuel Petit was among the first to hit back.

“For too long now, we athletes, the footballers, have been looked down upon with a lot of condescension by our ‘dear’ politicians,” Petit said.

“I would give them gym classes for the brain and even probity for the political classes. Notably in intellectual honesty, or in just honesty full stop.

Petit went on: “We footballers create wealth, unlike politicians, who live off the people’s money.”

“That's one thing that differentiates us: we don't steal money from people, we earn our money honestly,” he said.

Next up to take a free kick at Hollande was former French national coach Raymond Domenech.

“People go off the rails in all walks of life: politics, business and sport too. But football brings many more people on the right path than it the wrong path,” said Domenech.

Perhaps the most cutting response was from footballer Jonas Martin who responded by turning the words of Hollande’s famous “Moi President de la Republique” speech in 2012 in which he laid out what he would do as president of  France.

“Moi professional French footballer… I followed a normal education until I obtained the baccalaureate,” wrote Martin on Twitter.

“Moi professional French footballer… I learned to respect the people and institutions thanks to the teachers at my former club.

“Moi professional French footballer… I have never let down my public and reneged on my commitments to the club,” he said.

And finally former French player Franck Leboeuf summed up everyone’s reaction by saying: “I expected better from François Hollande but that really is stooping low”.