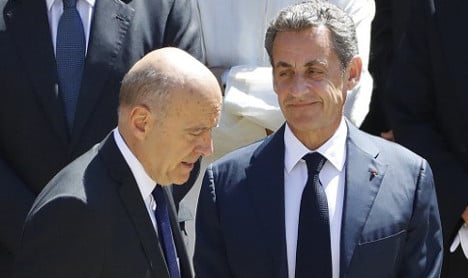 The stakes are high in the race for the nomination of the main opposition Republicans party and its allies.

Pollsters say whoever emerges victorious from the November 20-27 contest is likely to meet — and defeat — far-right leader Marine Le Pen of the National Front in the second round of the election in May.

The brash Sarkozy, 61, is waging an uphill fight for a return to the office he held from 2007 to 2012, lagging far behind his mild-mannered 71-year-old rival in voter surveys.

Sarkozy has been accused of chasing after National Front voters, tapping into fears about immigration and Islam fuelled by a string of jihadist attacks that have killed over 230 people in France in the past two years.

Polls show Juppe, the longtime mayor of Bordeaux, enjoying a lead of between eight and 14 percentage points over his rival, with five other candidates trailing behind.

All seven will take part in Thursday's debate, the first of three before the first round of the primary on November 20. The two top vote-getters will then debate one-on-one before the November 27 run-off. US-style primaries are a relatively new phenomenon in France.

The ruling Socialists were the first to experiment with the process in 2011, nominating Francois Hollande who went on to defeat the divisive Sarkozy in elections the following year.

Four years later the Socialists are in disarray.

Hollande, who is battling ratings unprecedentedly low for a post-war president, has yet to announce whether he will stand for re-election.

Irrespective of his decision, polls already show the Socialists being the big losers of the election.

National Front leader Le Pen, riding high on a nationalist, anti-migrant platform, is expected to place first or second in the first round of voting on April 23.

The run-off is expected to pit her against either Juppe or Sarkozy, with the conservative candidate forecast to win the keys to the Elysee Palace.

Sarkozy has made a series of populist proposals in recent days, notably pledging, if elected, to immediately hold a referendum on tightening immigration and jailing suspected Islamist radicals.

Juppe, currently France's most popular politician, is taking the opposite tack, positioning himself as a unifier and a moderate.

With the Socialists given little to no chance of retaining the presidency, some frustrated leftist voters have said they plan to sneak into the conservative primary.

“My main motivation is to block Nicolas Sarkozy,” said Eric, a left-leaning sports teacher who plans to take advantage of loose participation rules to cast a vote for Juppe.

Both right-wing frontrunners have been tarnished by scandal, though Sarkozy's are more recent and more numerous.

The ex-president faces inquiries into alleged influence-peddling and suspected illegal funding of his failed 2012 election campaign.

Juppe too was involved in a party finance scandal, for which he was convicted in 2004.

Gael Sliman of the Odoxa polling firm told AFP the challenge for Sarkozy, as the outsider, was “not to go overboard” during the debate.

Juppe, on the other hand, “should put himself above the fray, without coming across as arrogant.”