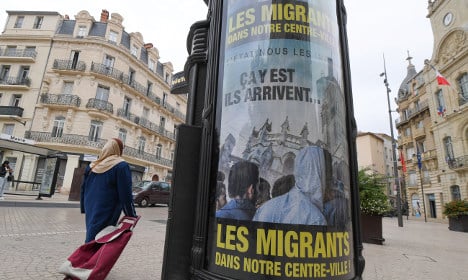 A notorious French mayor sparked outrage among rights groups Wednesday after putting up anti-migrant posters and calling for
a local referendum ahead of the arrival of asylum seekers in his town.

Under the headline “That's It, They're Coming”, is an image of a crowd of migrants, all of them men, outside the cathedral of the southern town of Beziers.

“The state is imposing them on us,” the poster reads. “Migrants in our town centre.”

The poster put out by Mayor Robert Menard, an ally of the far-right National Front, is a reaction to government plans to relocate thousands of migrants from the north coast to dozens of sites around France.

“A Town Hall campaign worthy of Vichy France. This mayor is a shame on our Republique,” said one. 'I'll do everything to ensure that these migrants don't settle in'

“SOS Racism has called for the region's governor to step in and stop Menard's planned referendum.

And the government's anti-racism body DILCRA has called on the prosecutor's office in Beziers to investigate what it says is a “flagrant” example of incitement to hatred.

“The repeated targeting of people or groups because of their origin or their beliefs cannot be accepted,” it said in a statement.

Speaking to French radio Wednesday, Menard said: “I'll do everything to ensure that these migrants don't settle in.”

Beziers' mayor since 2014, Menard said he had not been informed that a migrant reception centre was planned in the town and thought residents should be allowed to vote in a referendum asking whether the migrants should be accepted.

The government plans to break up the “Jungle”, a shantytown near Calais in northern France currently occupied by up to 9,000 migrants.

But while most communities have mobilised to help the new arrivals, the authorities in some smaller towns have objected, saying the government has imposed the new arrivals on them.

A few towns have seen anti-migrant demonstrations and some of the reception centres being prepared have been attacked.

Menard was for 23 years the head of the media rights group Reporters Without Borders, which has distanced itself from him since he left in 2008.

He has  been accused of racism on numerous occasions due to his history of causing a storm in his town from the moment he tried to chase out Syrian refugees from his town to banning the opening of kebab shops.

As is often the case these days, the Twittersphere took pleasure in mocking Menard by producing some spoof posters with pictures of French far right figures rather than migrants.

The one below says “stupid racist and xenophobic French mayors” instead of migrants.