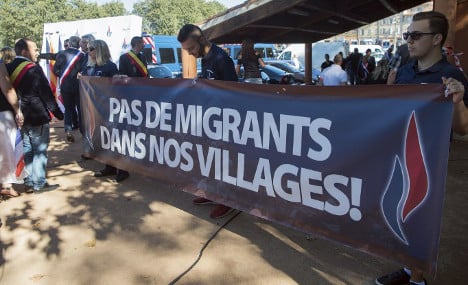 Supporters of the far right National Front protest against migrants in the village of Pierrefeu-du-Var, southern France. Photo: AFP

As French authorities prepare to raze the Calais “Jungle” camp and move thousands of migrants to shelters nationwide, two towns a few kilometres apart in the countryside near Paris reveal a nation torn between fear and fraternity.

In Forges-les-Bains, a town whose thermal baths once welcomed arthritic Parisians, 44 Afghan men received a frosty reception on their arrival last week to a disused hospital transformed into a migrant shelter.

Five days after they moved in, a group of around 250 protesters (see photo below), some waving French flags, marched through town to denounce the “imposition” of the shelter by the Socialist government.

“The state forced this centre on us but I for one don't intend to put up and shut up,” said Lea, a young mother, as she pushed her toddler son down the street. The town of 3,700 people is one of a handful where unease over immigration, stoked by a string of jihadist attacks and inflammatory rhetoric from right-wing politicians, has led to attacks on migrant shelters in recent weeks.

A gaping hole in the roof of one building revealed the damage (see photo below) wrought by opponents who had tried to set the shelter alight before the Afghans arrived.

In the past week shots have been fired at two other shelters set to receive migrants — one in western France, another in the southeast. Most of the opposition has been in small towns which complain they were presented with a fait accompli by a state scrambling before winter to find accommodation for the migrants from the squalid makeshift camp in Calais — mainly Sudanese, Afghans, Eritreans and Pakistanis according to NGOS working there.

“A project imposed equals increased anger,” read a banner held aloft by demonstrators in Forges-les-Bains, who have demanded a moratorium on new arrivals at the centre.

With a further 47 migrants bound for the town in the coming weeks, the stage is set for a showdown.

The government is looking to move up to 12,000 migrants out of overstretched Calais and also Paris by the end of the year.

The numbers represent a fraction of the 80,000 asylum applicants France expects to receive this year — itself a drop in the ocean compared with the nearly 900,000 received by Germany last year.

But with immigration a hot topic in next year's presidential and parliamentary elections the right-wing opposition has come out all guns blazing.

The interim leader of former president Nicolas Sarkozy's Republicans party, Laurent Wauquiez, accused the government of creating Calais-style “jungles all over the country”. The parents leading resistance to the shelter in Forges-les-Bains bristle at being tarred intolerant.

“We're not against migrants. We would have happily taken families,” said Valerie Rigal, a midwife, echoing concerns expressed by many residents over the presence of a shelter for a group of single men 100 metres (yards) from a school.

One mother who did not wish to be named feared “incidents like those in Germany”, referring to the rash of sexual assaults in Cologne on New Year's Eve, blamed mainly on North African men.

But a symbolic vote organised by the mayor showed opposition to migrants going beyond such fears, with 59 percent of respondents against taking in any migrants, families included.

“I'd rather we support our own homeless,” said Audrey Guibert, a councillor from the far-right National Front (FN), who was among the demonstrators.

A year ago, a different France was on display when a first group of refugees, mainly from the war-torn Middle East, arrived from Germany under a faltering plan to distribute the migrants pouring into Europe among EU member states.

The mayor of Bonnelles, a town of around 2,000 people eight kilometres (five miles) from Forges-les-Bains, was swamped with donations when 78 Syrian and Iraqi men landed in a monastery on the edge of his leafy village.

“From the start it went well. Everyone rolled up their sleeves,” Guy Poupart said. Since then scores of migrants have passed through the monastery where they get a bed, food and lessons in French language and culture.

“I learned to read and write here. I love France,” he said, pausing for breath during a fast-paced football game between Afghans, Pakistanis, Sudanese and local youths.

Over 3,000 asylum-seekers have already been moved to the provinces in the past year, with little fanfare and fuss.

Bruno Morel, director general of Emmaus Solidarite, the housing charity in charge of the shelter in Forges-les-Bains, attributed the sudden circling of the wagons to newfound fears about a “mythical violent migrant.”

“We have to bust this myth,” he said, warning that France, long a haven for people fleeing war and persecution, would be “turning its back on its history if it is not capable of welcoming people with a little kindness and humanity.”

“We all have a role to play in welcoming migrants,” she said. “We have to show them another image of France.”