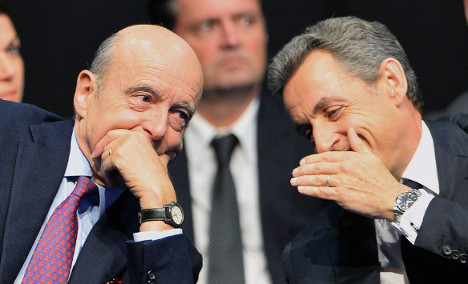 That’s the question that was dominating the ever-more vitriolic race to be the centre-right candidate for the next year’s presidential election in France.

And bearing in mind the winner of that race is predicted to win the main competition to get the keys to the Elysée palace next Spring, there’s a lot at stake.

Which is possibly why favourite Alain Juppé and his chief rival Nicolas Sarkozy have resorted to digging up their dirt about each other’s legal troubles.

Juppé has a 2004 corruption conviction to his name during his time as finance chief at Paris Town Hall when it emerged public funds were used to pay political allies employed in fictitious jobs at City Hall.

Sarkozy on the other hand has been formally investigated (or mis en examen which is the nearest French equivalent to being charged) in several corruption investigations. Some of these have been dropped, but others are ongoing)

Sarkozy backer Nadine Morano launched the first barb against Juppé this week saying: “When you are formally investigated, you are presumed innocent. When you have been condemned, you are certified guilty.”

Alain Juppé’s riposte was not long in coming.

“You know in terms of legal cases, it’s better to have a past than a future,” he said, referring to the cases that could see Sarkozy put on trial.

And then Sarkozy’s campaign spokeswoman fired back that the best option “in criminal matters, was not to be convicted at all.” So who's the worst?

Juppé has major black mark on his political CV. The fact he knew seven members of his RPR political party were on the payroll of City Hall as fictitious employees between 1989 and 1995 in order to help secure public contracts will never look good.

Although in his favour Juppé’s offence was a long time ago and many believed the real fall guy was former President Jacques Chirac, who was mayor of Paris at the time of the corruption scandal.

Chirac was later convicted once he left power and his immunity as president was dropped.

Nevertheless the 2004 conviction was crushing for Juppé and at first it looked like it had ended his political career. He was initially barred from serving public office for a decade but that was reduced to one year on appeal.

The judges at the time however did not hold back in their condemnation of the former prime minister.

“The nature of the acts committed is intolerable to society,” the court ruled. By engaging in such actions, the court judged that Mr Juppe had “betrayed the trust of the sovereign people”.

“Alain Juppé acted knowingly to his own direct or indirect advantage. This represents an abuse of office,” the judgement read.

Juppé had been favourite to succeed Jacques Chirac as president in 2007 but the conviction derailed his plans and he ended up teaching at a university in Quebec. And the man to take advantage of his fall from grace in 2004 was none other than Nicolas Sarkozy who became president after Chriac.

Since then however Juppé has salvaged his reputation as the mayor of Bordeaux and in 2014 was named France's most popular politician. Quite a comeback.

Only last month prosecutors recommended he stand trial over alleged illegal campaign financing surrounding his failed bid to retain the presidency in 2012.

The campaign financing case, one of several investigations which have dogged Sarkozy since leaving office, involves allegedly false accounting used in 2012 to conceal campaign overspending by his office.

The good news is the case is unlikely to come to trial before the primary election in November nor the presidential election in May.

Sarkozy also still faces accusations of conspiring with his lawyer to bribe a magistrate in exchange for inside information on a separate corruption probe.

In the most sensational case against him, Sarkozy was cleared in October 2013 of accepting campaign donations in 2007 from France's richest woman, L'Oreal heiress Liliane Bettencourt, when she was too frail to know what she was doing.

But he has also faced accusations that his 2007 presidential campaign was bankrolled by former Libyan dictator Moamer Kadhafi.

Sarkozy has repeatedly protested his innocence and says all the investigations against are just political manoeuvers by his enemies.

Juppé says his advantage is that the French people know his past and he has explained it to them many times. Sarkozy on the other hand might have some explaining to do in the future.

So who to vote for?