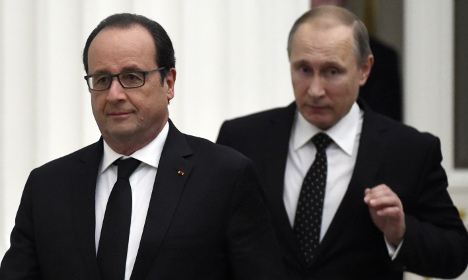 Putin’s visit has been long planned and the highlight was to be the inauguration of the Russian Orthodox church which stands not far from the Eiffel Tower on the banks of the River Seine.

The presidency told the Kremlin that the only event Hollande wanted to attend with Putin during the visit would be a “working meeting” on Syria, and that Russia then “let it be known that it wanted to postpone the visit”, the French presidency said.

“The president has decided to cancel this visit,” Kremlin spokesman Dmitry Peskov told reporters, referring to a long-planned trip to Paris set for October 19. “

From the very start of his exchanges with his French colleague, President Putin noted that he is ready to visit Paris when it is comfortable for President Hollande. So we'll wait for when that comfortable time comes.”

President François Hollande responded by saying he was ready to meet Putin “any time” in order to “further peace”.

“Dialogue is necessary with Russia but it must be firm and frank,” Hollande said in the northeastern French city of Strasbourg.

During the long-planned visit to Paris, set for October 19, Putin was to inaugurate a new Russian Orthodox church near the Eiffel Tower, with much of the trip described as “private”. But Russian Foreign Minister Sergei Lavrov said last week that Putin would hold talks with Hollande on Syria, where Russian forces have carried out air strikes on the besieged city of Aleppo in support of the Syrian ground offensive.

Hollande said Monday he had not yet decided whether to meet Putin and said President Bashar al-Assad's troops had committed a “war crime” in Aleppo with Russia's support.

“Those who commit these acts will have to pay for their involvement, including at the International Criminal Court,” Hollande said in an interview with TMC.