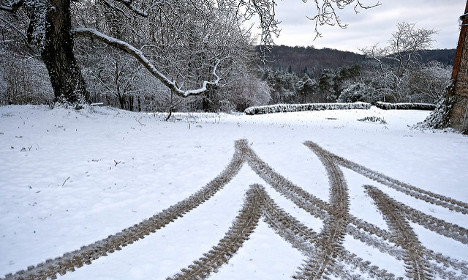 Photo: Max Sat/Flickr
Yes, it's already snowing in (some parts) of France – and there's a storm brewing too.
France's weather agency Météo France predicted “fairly significant snowfall” in the French Alps as a storm passes across the country on Wednesday and Thursday.
The storm will also bring some serious rainfall further west, especially in Languedoc and the Cévennes, as well as in the mountains of Corsica.
Those along the Mediterranean coast are predicted to be hit by rough seas and potential flooding. Photo: Météo France
The areas are expected to be issued on Wednesday evening with an orange alert, the second highest warning level that asks the public to be “very vigilant”.
But in the calm before the storm, some in France have already had their first taste of snow this winter.
Residents of Varberg in the French Alps took to social media on Tuesday to share their snowy pics online.
They're predicted to get up to three centimetres of snow throughout the day, and up to ten on Wednesday.

People in eastern France's Vosges were also sharing pics of (an admittedly quite light) snowfall on Sunday (see below).

The photos below are from the Isola 2000 ski slopes in south eastern France and were taken on Monday.

As for the rest of France, very few will escape the upcoming chill (if they're not feeling it already).
The early hours of Wednesday morning will bring sub-zero temperatures in some parts of central, northern, and eastern France.
If you're in Paris, perhaps bring some gloves for the morning bike ride as the temperatures will reach as low as 5C before a predicted high of 15C on Wednesday.
If you're looking for some warmth, your best bet is the south western reaches of the country, where it will be cloudy by where temperatures will be nudging 20C.