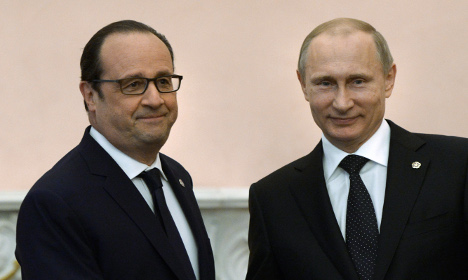 “The population [of Aleppo] is the victim of war crimes. Those who commit these acts will pay for this responsibility before the international court of justice,” Hollande told the French TV show Quotidien in an interview to be aired on Monday night.

Tensions between Russia and the West have grown in recent weeks due to Moscow backing Bachar al-Assad's bombing campaign in war torn Syria.

Hundreds have been killed in the shelling of Aleppo, in what has been one of the bloodiest offensives in the Syrian war.

At the weekend Russia vetoed a UN resolution that aimed at stopping the bombing of Aleppo claiming that it would “protect terrorists”.

Before the UN meeting French Foreign Minister Jean-Marc Ayrault had urged the UN Security Council to take immediate action to save the Syrian city of Aleppo from being destroyed by the Russia-backed Syrian bombing campaign.

In the TV interview with Quotidien, Hollande said he had asked himself the question of whether he should be welcoming Putin to Paris at all, given the deadlock and the anger of Moscow’s refusal to end the bombing.

“I asked myself the question. Will it be useful? Will it be necessary? Can we ensure that he will stop what he is doing with the Syrian regime? That means supporting the regime forces who are dropping the bombs on the population of Aleppo,” Hollande said.

“If we hold talks I will tell him that it is unacceptable. That it is serious, even for the image of Russia.”

Putin is due in Paris on October 19th.

The Russian leader's visit to France — his first to the country since he attended aclimate summit in Paris late last year — has been in the planning for months, with the Kremlin strongman expected to inaugurate a Russian Orthodox cultural complex in the capital.