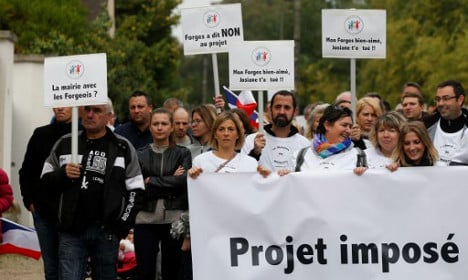 Photos: AFP
Around 250 people joined a march on Saturday in Forges-les-Bains, about 30 kilometres southwest of Paris (see map below), against a migrant reception centre which opened Monday, housing 44 Afghans, an AFP journalist at the scene reported.
“The state forced this centre on us but I for one don't intend to just put up and shut up,” said Lea, a young mother of two, who declined to give her surname.
Valerie Rigal, a leader of the marchers who are calling for a “moratorium” on further arrivals, insisted the villagers were not opposed to all migrants.
“We're not against migrants. We would have happily taken migrant families. What we didn't want was single men only,” she said.
“My daughter takes the bus outside the centre every day. She's worried about running into groups of strange men.”
The leafy hamlet of 3,700 residents, surrounded by woodland and corn fields, is expected to receive 91 asylum seekers. They are to be accommodated in an imposing disused hospital surrounded by high fencing. Forges-les-Bains. Photo: GoogleMaps
In Pierrefeu-du-Var, southern France, a disused part of a psychiatric hospital has been chosen by authorities to house 60 asylum seekers currently in Calais who will be relocated from November.
Opposition to that plan brought out some 600 people to a rally in the village about 20 kilometres from Hyeres near the Mediterranean coast, police said.
Patrick Martinelli, mayor of the village of 6,000 residents, with the local council voted against the state's plan to send 60 men to Pierrefeu-du-Var, arguing that “a rural village was unsuitable for receiving such a population”.
The far-right National Front (FN) party later on Saturday afternoon staged in its own anti-migrant protest with around 650 supporters, according to police.
But not everyone agreed with the efforts to block the migrant centres.
Another demonstration in Pierrefeu-du-Var, organised by anti-far-right and leftist groups, took place with around 250 people carrying banners saying “Yes, to solidarity and welcome for migrants and refugees,” an AFP correspondent there reported. Also in Forges-les-Bains onlookers at the anti-migrant protests criticised the demonstrators' attitude.
“It's shameful,” said Jennifer Sandalian, who works in a retirement home, fighting back tears.
“We all have a role to play in welcoming migrants, as human beings. We have to show them another image of France.”
In Montpellier, southern France, around 100 protesters opposed to “the migrant invasion” and the “Islamisation” of the country were met by roughly the same number of anti-fascist demonstrators.
Riot police were deployed to separate the two groups.
And in Allex, south east France, 80 people gathered to protest the plans to resettle migrants currently in Calais across the country.
President Francois Hollande had announced during a visit to Calais last month that the makeshift camp which houses up to 10,000 people, would be dismantled by the end of the year and the asylum seekers relocated to centres around France.