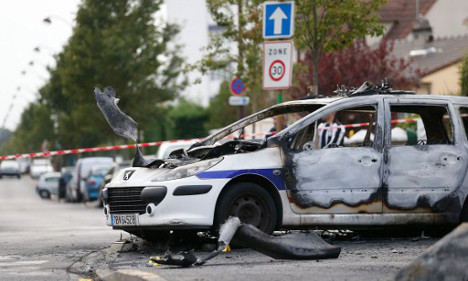 Photo: AFP
Four officers were injured when a group of around 15 youths swarmed their cars in the town of Viry-Chatillon and lobbed Molotov cocktails at them.
A witness told BFM TV that the incident was over in just minutes.
“I saw a dozen hooded people who went straight up to the police cars. They smashed the window and threw Molotov cocktails in both vehicles,” the witness told the channel.
The witness added that passersby tried to help the police out of the car.
“It was the people who were burning, it was shocking. When I see people who attack police, these people are extremely determined. These people had no fear.”
The 28-year-old male officer suffered “very serious burns on the hands and the entire body,” prosecutor Eric Lallement said.
Doctors had placed him in an induced coma while waiting to see how he responded to treatment, the prosecutor added.
His 39-year-old female partner was also badly burned on the hands and face, while two other officers who arrived as backup received minor injuries.
Both police cars were completely gutted by fire. Photo: AFP
The officers were patrolling a traffic junction next to a notorious high-rise estate, where robbers have repeatedly targeted passing motorists.
Prime Minister Manuel Valls said the culprits would be “relentlessly pursued and brought to justice. At a time when the security forces are bravely responding to the (terrorist) threats facing our country, such intolerable acts call for exemplary sanctions”.
The French police have complained of being increasingly under attack — from jihadists, ordinary criminals and hooded youths who have clashed with police during recent demonstrations over labour reforms.
Alain Juppe, the favourite to win the conservative nomination for president in next year's elections, tweeted his solidarity with the victims of Saturday's attack.
“A strong state is a state that does not back away, that ends (the existence) of lawless areas,” he wrote.
Url copied to clipboard!