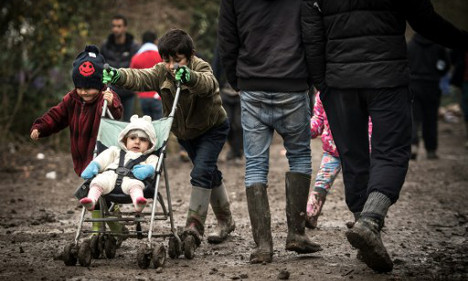 Photo: AFP
“I am solemnly asking Britain to assume its moral duty”, Interior Minister Bernard Cazeneuve told RTL radio ahead of a trip to London to meet his British counterpart Amber Rudd.
“There are several hundred unaccompanied minors in Calais who have family in Britain. We are in the process of drawing up a precise list and the British need to live up to their responsibilities.
“We have lived up to ours,” stressed the minister.
French officials have said that work to dismantle the sprawling migrant camp known as the Jungle in the port of Calais could begin as early as this month, with residents scattered to reception centres across France.
The makeshift settlement has become the focal point in France of Europe's migrant crisis, fought over by politicians and a constant source of tension with Britain.
Cazeneuve said last week there were up to 950 children living in the “Jungle”, many unaccompanied.
Campaigners say many of the children have family in Britain and should be allowed to travel there.
At a previous meeting in Paris, the two ministers urged a united front over the Jungle camp and cross Channel security more generally.
“We are committed to working together to strengthen the security of our shared border (and) to strongly diminish the migratory pressure in Calais,” they said in a joint statement.