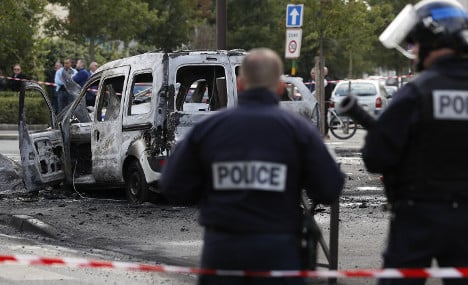 The aftermath of the car bomb attack in Viry-Châtillon. Photo: AFP

Valls was paying a visit to the suburb of Paris where four police officers were injured on Saturday after coming under fire from a hail of Molotov cocktails.

The incident, which left one officer in a critical condition, occurred near the notorious housing estate of La Grande Borne in Viry-Châtillon, to the south of Paris.

The attack on the officers, who were protecting a CCTV camera installed in an area where there had been a spate of robberies on motorists, was used as ammunition by opposition politicians who claimed the government had allowed lawless areas to develop.

But PM Valls, who was joined by interior minister Bernard Cazeneuve said: “The authority of the state will be guaranteed. There are no no-go zones” before acknowledging that there are “particularly difficult areas”.

Valls promised all would be done to bring those responsible for the petrol bomb attack to justice.

“These individuals will be found, brought to justice and severely punished because when we attack the police, we attack France itself,” said the PM.

But police unions disagreed with the prime minister. (PM Manuel Valls on a visit to Viry-Châtillon. AFP)

“Of course there are no-go zones in France where the police cannot intervene and do their jobs in safety,” Denis Jacob from the union Alternative police-CFDT told The Local. “And it’s the same for fire fighters or pretty much any representative of the state.

“The police can’t apply the law in these areas, they are attacked. If the police can’t do their work it’s because there are criminals and delinquents who don’t respect the law.”

New statistics were released on Monday that will concern Valls and anyone working in the French police force.

According to France’s national crime observatory, between 2010 and 2015 the number of police and gendarmes (military police) injured while on duty rose by 25 percent.

“A section of the population has no respect for the police or the state anymore,” said Jacob.

He said the solution was a return to local policing and local police stations or the UK's old “bobbies on the beat” style of policing.

“I’ve been in the French national police for 30 years. When I started there were police working locally in local police stations, but these have been taken away,” said Jacob.

“The police used to know all the young people in the area and would build up important intelligence on who were the criminals.

“They would also get information from the local population who now feel completely abandoned,” he added.

Following the attack in Viry-Châtillon scores of riot police flooded the area as a show of force from authorities, but Jacob says it will ultimately be pointless.

“When it calms down the riot police will go and when they do, things will just return to how they were.

“The government needs to reinvest in permanent local police forces.”