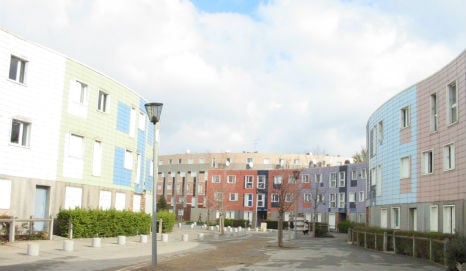 La rue du Labyrinthe in La Grande Borne. Photo: Nioux/Wikimedia Commons
“Everything will be done to find the perpetrators of this attack and bring them to justice so they receive a sentence in-keeping with the severity of their crime,” said the president.
Hollande said the attack in Grande Borne, a residential residential area built in the 1960s in Paris' southern suburbs, was “unspeakable and intolerable because it endangered the lives of officers whose job was to protect the population”.
Prime Minister Manuel Valls said two officers “were violently attacked with incendiary bombs while they were on a surveillance mission in the Grande Borne high security zone.”
“Their colleagues who came to back them up were also targeted,” he said, describing the attack as “extremely serious and very cowardly”.
Earlier a police source described the weapons used as Molotov cocktails.
The two badly injured officers “have major burns and were taken to a hospital in Paris,” they added.
The two police cars were set ablaze prompting backup to be sent to the scene but no arrests were made, the police source said. The traffic light where the attack occurred has frequently been the scene of violent robberies.
Valls said the culprits would be “relentlessly pursued and brought to justice. At a time when the security forces are bravely responding to the (terrorist) threats facing our country, such intolerable acts call for
exemplary sanctions”.
The local mayor, Jean-Marie Vilain, told AFP that as a result of Saturday's incident the response to chronic criminality in the area would be stepped up.
“The next step will be to go inside Grande Borne to put an end to all the drug dealing, because that is really what the cameras interfere with,” he said.