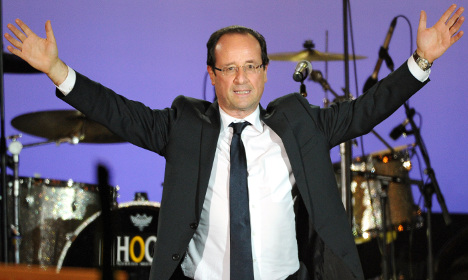 French president François Hollande, who is keeping the whole country on edge over whether he will go for re-election, said recently.

Here's why his bold claim should not just be laughed off, quite yet.

Please bear in mind the experts who contributed to this report believe Hollande has little to no chance of winning.

Yes if we accept he’s already lost as most do, then why shouldn’t Hollande throw his hat into the ring?

“He would become the first president in the fifth Republic not to stand for re-election,” says Opinion Way’s Bruno Jeanbart.

“If he doesn’t stand it will be just as bad for him as if he was knocked out in the first round.”

So Hollande, you have nothing to lose. French political analyst Bruno Cautres added that Hollande has a “sense of duty” to stand up and defend what he has done in five years. “Because someone has to do it.” Hollande will have learned by now that if he wants to sleep at night he should stop reading opinion polls, but one survey he should read at night is the one that suggests no other candidate on the left, nor his upstart former minister turned “traitor” Emmanuel Macron, would pass to the second round of the vote.

The French public do not seem enamoured by the likes former ministers Arnaud Montebourg and Benoit Hamon who are standing in the Socialist party primary and current PM Manuel Valls, who would probably stand if Hollande declines to, doesn't even want to. He is eyeing 2022 instead.

And Opinion Way's Jeanbart believes Hollande would win the left-wing primary. “To be the incumbent president is a huge advantage,” he said. Even the most unpopular one ever. (Hollande won the 2011 Socialist party primary, why not again…AFP)

3. He's up against 'Thatcherite' Fillon

OK, Nicolas Sarkozy would have been the perfect candidate because after Hollande, he was the second most unpopular president. He was hated on the left, which was probably the reason why he lost in the first round of the rightwing primary – 15 percent of some 4.2 million voters said they were Socialists.

But Hollande would be up against Fillon, a self-confessed Thatcherite, whose plan to liberate the French economy and massively cut public spending and the welfare state will not win support on the left, that's for sure.

Fillon is also a Catholic conservative, which may be popular in traditional rural France, it won't go down well with progressives in France.

In other words he's the perfect candidate to face.

Let’s face it, Hollande did not invade Iraq, nor did he selfishly gamble his country’s future by holding a referendum motivated by personal reasons, nor did he intervene in Libya and leave a big mess behind (you know who you are).

“He did not do anything really bad. Even his 75 percent tax may have looked bad for the country symbolically, but it did not change anything,” says Opinion Way's Jeanbart. There's gay marriage, the COP 21 climate deal he helped push through, there are more teachers, they are better paid and the OECD has praised his education reforms. Hollande has also made some necessary savings in welfare spending particularly in the area of health, although granted there's more to do. He believes he can get the budget deficit down to 2.7 percent of GDP – the lowest in a decade.“It will be difficult for the next government to do as much as Hollande has done in this area,” said French economist Xavier Timbeau.

Economists recognise that Hollande’s landmark “Responsibility Pact” in which payroll costs for companies were cut in the hope they would hire new staff is having an impact. Some 230,000 jobs have been created or saved because of this, they say.

“If we look at the statistics the level of unemployment in May 2017 should be lower than it was at the start of Hollande’s presidency,” says Timbeau, who argues Hollande will in future be credited with bringing about a subtle but important change in the balance of power between companies and trade unions thanks to his controversial labour reforms. “In the future he will probably be seen as someone who did more or less what was needed for France at that time,” says the economist.

6. So if a future president will benefit from his reforms, why not him

One thing Hollande is aware of is that his reforms, including payroll tax cuts for business and the loosening of the rigid labour laws are now unlikely to impact unemployment in time for the election but they will do eventually. Most analysts accept that any future president will benefit from his reforms, so why not Hollande himself? He just has to find a way of convincing the public to give him another five-year contract. The one aspect of Hollande’s presidency that the public seem to give him credit for is the way he handled the string of terror attacks and foiled attempts.

Apart from when he lost the plot during his crazy attempt to change the constitution to be able strip French terrorists of their passports (it was never going to work), Hollande has remained very presidential and has fought to preserve unity at a time when others have spoken of the threat of civil war. With the terror threat not diminishing, Hollande could convince the public that he is exactly the kind of leader France needs during fraught times ahead.

8. So what he broke a few promises, which politician hasn’t?

Perhaps Hollande’s major fault is not what he has done but what he promised to do. By declaring the “world of finance his enemy” and promising to end austerity Hollande gave those on the left real hope of change.

But then the president realised the economic pickle France was in and changed tack (at the behest of Brussels) albeit a little late. He also made the mistake of promising to cut unemployment and vowing not to stand for re-election unless he did. But surely he can be forgiven for a few unkept promises and unwise gambles.  “His record is nowhere near what he promised, but it’s not that bad either,” says Timbeau. Couldn’t this be applied to pretty much any head of state? “In French politics you are never dead,” says political analyst from Sciences-Po Bruno Cautres. “And the more you try to tell a politician they are dead, they more they want to prove you wrong. François Hollande will still think he has a chance.”

French politics can be a strange affair with many politicians coming from the dead before not least Juppé after a corruption conviction and Sarkozy after a humiliating defeat in 2012. Hollande could still prove to be the ultimate French Lazarus.