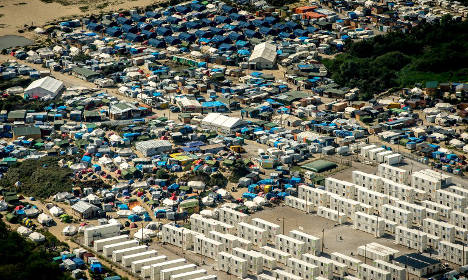 As France prepares to close down the squalid 'Jungle' migrant camp in the northern port of Calais, Amjad from Pakistan can't wait to get away.

“That's six months they have been telling us that the 'Jungle' is done with…  but it never ends,” he told AFP.

“Everyone here knows that they will soon have to leave and are wondering what they are going to do,” he said. “Me, I'll take the train to Paris.”

Work to tear down the sprawling slum in the Channel port could start before the end of the month, according to French officials.

The plan is to scatter the migrants from the 'Jungle' to around a hundred reception centres across France, and at least some camp residents seem willing to make a go of it.

“It's good that the dismantling is coming,” said Noah, a young Sudanese migrant. “When the 'Jungle' is destroyed we will be spread around to better places.”

President Francois Hollande announced during a visit to Calais last week that the camp would be dismantled by the end of the year.

The makeshift settlement has become the focal point in France of Europe's migrant crisis, fought over by politicians and a constant source of tension with Britain.

Aid groups however have expressed anger at the plan to tear down the Jungle without an adequate alternative plan in place. They point to the fact that the part of the cap has already been bulldozed and the numbers still swelled. “In February over half of the camp was demolished and yet six months later the camp is bigger than it has ever been before,” said Clare Mosely from Care4Calais.

“This clearly shows that demolitions do not act as a deterrent and that refugees will not stop coming toCalais. Destroying their homes will do nothing more than make living conditions so much more inhumane.

“The alternative provisions offered by the French Government do not address the key reasons refugees are settling in Calais and therefore cannot provide a long-term solution to the crisis.”

The main alley of the jungle camp was almost empty this week.

Only a couple of grocers and an Afghan restaurant were open for business, the smell of their cooking adding spice to the air on a fresh autumn morning.

As recently as mid-September, two aid groups reckoned that an influx this summer had taken the number of migrants at the camp to just over 10,000 — but not any more, judging by the numbers turning up for meals.

“We have dropped back down below the level of 3,000 meals a day, when just three weeks ago we were at 4,500,” said Stephane Duval, the head of a centre at the camp that offers food and some accommodation.

It is a similar story from L'Auberge des Migrants, one of the main associations working on the site.

“Our view is the people who don't want to stay in France have already left, mainly to Grande-Synthe,” a camp further east along the northern coast.

At the same time, said Duval, there has been a surge of migrants taking shelter in a more permanent part of the camp, amid concerns about the coming chaos as the dismantling gets under way.

As a result all 1,500 places at his centre were now occupied. But not everyone is willing to abandon the north coast of France across the Channel from Britain.

Some migrants still have their sights set on England, despite the dangers of trying to stow away in lorries heading across the Channel.

Only last month a 14-year-old Afghan boy died trying to board a truck.

“It's England or nothing,” Aldon, a 20-year-old Sudanese migrant, insisted, saying he was determined to stay in the Calais area even after the 'Jungle' was gone.

“I'll stay here as long as I can and when they dismantle it, I'll move away — but not too far,” he said.

For Salome at L'Auberge des Migrants, that is a problem. “We don't know where they are going to go,” he said.

His concern is that they could end up sleeping in “public gardens, under bridges or in the fields”.

So as well as calling for bags and suitcases to help those migrants moving on, the organisation has appealed for tents and sleeping bags. The centre has already received more than 1,500 items of luggage.

While the closure of the southern part of the 'Jungle' in March provoked fierce clashes between riot police and the migrants, news of this final shutdown has not, for the moment at least, generated the same level of resistance.

Salome said: “We don't want this shanty town to go on. Now there's a chance for the migrants who stay in France to be better off.”

But special arrangements will have to be made for the children at the site.

French Interior Minister Bernard Cazeneuve said this week there were up to 950 children living in the 'Jungle', many unaccompanied.

Campaigners also say that many of the children have family in Britain and should be allowed to travel there.