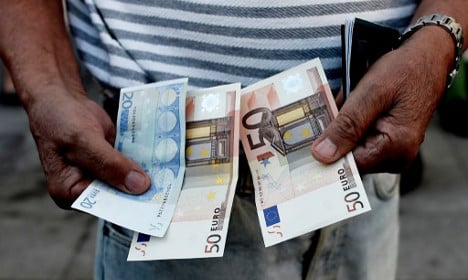 Photo: AFP
At the time of writing, the British pound was worth €1.13, after it suffered a dramatic collapse in the early hours of Friday.
This comes after the pound suffered another major drop back in June when the shock result of the Brexit vote was announced.
Pensioners living in France, many of whom rely on their British pensions, have told The Local how much the weakening pound has changed their lives – with many reporting a 30 percent drop in income. The last week of the pound against the euro.
Can't justify a haircut
Debbie Coxon, 62, who lives in central France's Creuse department, said she has been left feeling “really emotional” after Friday's news, a feeling that's been lurking since the Britain voted to leave the EU.
“We were horrified by the vote, and we're fed up of people not in our position saying, 'Nothing much will change' when it already has big time for us,” she told The Local.
“With today's crash, we will now be into finite savings for every bill.”
She said that she has to wait until 2020 for her own pension, and that her husband only recently retired at the age of 69.
“We know we can't let it get us down, but having just had to shell out for our winter oil and car service yesterday, that's when the edge is taken off living off the fresh veg and sunshine.
“Personally I feel spat out and utterly ignored – I don't feel I can even justify having my hair cut as an unnecessary expense.” Photo: AFP
Can we put the heating on?
Lynda Adcock, a 63-year-old in Brittany, has been left in a similar boat.
“We are really struggling at the moment and it has made us very sad and angry, just for the sake of a political spat between friends. I shall never understand the mess that the referendum had caused,” she told The Local.
“The exchange rate means that we have to think about if we can put the heating on, what we eat and it has generally made a huge impact on our daily life. We always pay our bills first and keep a roof over our heads. That is what is important.”
“We have the added matter of feeling insecure with absolutely no information coming from the British government as to how they are going to treat us in times to come, post Brexit.
“We worked hard and long for what we have today and came to France for a better life after my husband was made redundant as the exchange rate was good then and we could afford to live on his pension. It's very different now, we're always worrying about money and I hate it!” Photo: AFP
Christmas won't be the same
Sally Hipwood, a 67-year-old in south eastern France's Vienne department, said she has been left in dismay and fearing the future.
“We have had to rein in our spending, for example we enjoy going to our local auberge for lunch and used to go two or three times a week, whereas now we have reduced it to once a week and, if the pound goes any lower, may have to abandon it altogether,” she told The Local.
“I have already reduced the amount of money I spend each week on groceries. The biggest impact for me though is going to be that I will not be able to go to the UK to see my family as often as I would wish.
“We have just about enough to manage the trip this Christmas (but have had to ask for a family agreement that the adult members do not buy presents for each other, gifts will be limited to the children) but further trips are currently in doubt, as bills continue to rise whilst our income falls.” (AFP)
Dreading the bills
Cenydd Lowe in Brittany is on a fixed UK pension of around £1,300 per month which he said has seen a serious drop.
“It used to be ample – now it's worth £300 less, and I'm having to live frugally,” he said.
He added that he was “desperately trying” to get his business going in France to get some income in euros to make up the difference.
“I'm well off though, relatively. I have friends who are unable to invite their friends round for meals as they're literally on the breadline.”
He added, however, that he dreads the bills, doesn't go out for meals, and hasn't bought any clothes for a decade. Being mocked for living in Europe
Jane Shulver admits that fluctuations in currency was a part of the risk assessment she had made when choosing to up sticks and move to France.
“However the total folly of Brexit and the way it is being handled has left us feeling very bitter about the knock-on effect on our finances,” she said.
“It is as though we are being mocked for living in Europe. At the same time we have rising costs here. At this time of year big bills have to be paid so we've had to have a serious overhaul of our living costs, which are already fairly frugal by many people's standards. We'll need to cut down, and make far fewer visits back to the UK to see our family.”
READ ALSO: How the Brexit vote affects your British pension in France