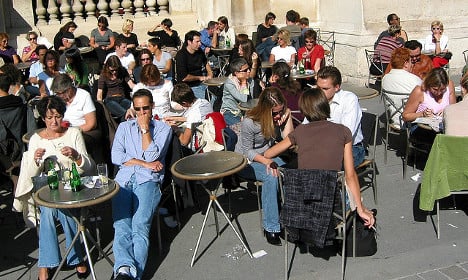 Photo: Pierre Metivier/Flickr
If you're a foreigner living in France, does that make you an expat? Or an immigrant?
The subject is a touchy one, and it's close to impossible to please everyone.
Our story on Wednesday titled “How Brexit vote has changed life for expats in France” prompted a fierce debate on Facebook about our choice of the word “expat” in the headline. In fact, the whole Brexit issue (for once) seemed totally forgotten.
Some readers advised us to change the offending word to “immigrants” – because that's exactly what all are.
“I'm a proud European who used my right to move country and not an 'expat',” said Martin Cooper. “It totally sends the wrong message to our citizens in our new country and to our old homeland.”
Elaine Jacobs added: “There is something wrong with the word “ex-pats”. It reeks of British colonialism, rather than movement.”
Some said using the term expat “contributed to a dangerous populist rhetoric” for our choice of words on the matter.
Others however staunchly defended the word “expat”.
“I think people make far too much fuss about the word 'expat'. As long as it's used in its neutral sense, it's fine,” said Simon Barnes in a comment below Wednesday's article.
“But to conflate freedom of movement within the EU and immigration is dangerous. It just gives ammunition to those who would deprive us of our freedom.”

So what does expat actually mean?
The Oxford dictionary defines expat as “a person who lives outside their native country” and the word stems from the Latin ex meaning “out” and patria meaning “native country”.
So all foreigners are expats, right? Well, that's the problem – when did you last hear about an Indian in France, a Polish worker in Britain, or indeed a Syrian refugee referred to as an “expat”.
The word “expat” conjures up post-colonial images of well-off foreigners who have made some kind of comfortable and temporary country switch.
We're talking the Ernest Hemingways of Paris, lazing about on a cafe terrace with a cocktail, living in a nice part of the city with a decent income (or at least a decent bank balance). Ernest Hemingway. Photo: Lloyd Arnold/WikiCommons
What's an immigrant?
An “immigrant” is “a person who comes to live permanently in a foreign country”, says the Oxford dictionary.
So the only difference, in terms of strict definition, is that an immigrant is permanent – suggesting an expat is on a (perhaps long-term) return ticket.
The difference is at best random and at worst racist.
The word expat comes with connotations of choice and wealth and being white, while 'immigrants' are assumed to work in low-paid jobs or claim benefits.
An opinion piece in The Guardian went as far as to say that the word expat is a “hierarchical word” that was “created with the purpose of putting white people above everyone else”.
The issue is reminiscent of the recent media attention to the words “migrant” and “refugee”, with many papers making the switch to refugee earlier this year as the crisis got worse and it became clearer that most of the people were fleeing for their lives from war rather than undertaking the dangerous journey as a career move.
So why use the word expat at all?
When The Local was founded, we had a blanket ban on using the word. So why do we use it today – apart from the fact that it's much easier to fit 'expat' into the 56 characters we are allowed in a headline?
First, because although we are uneasy about the word too, many people who move freely for their careers or for the lifestyle use it to define themselves.
Second, because there is a meaningful distinction between groups of immigrants – but it's not one of hierarchy, it's really one of luck.
'Expat', logically or not, is understood to describe the lucky immigrants who move country for the lifestyle or a good job. These people might stay for life or might not, but there's usually little to stop them returning – in contrast to people who are forced to move for fear of their lives or to escape poverty.
So expats face different – and lesser –  challenges than most other immigrants. Saying 'expat' is not an attempt set one set of immigrants above another, it's an acknowledgement that the immigrant experience varies enormously.
Which brings me to my third point: we acknowledge that expats are immigrants too. The two terms are not mutually exclusive. And as much as finances or cultural capital divide immigrants, our common struggles with language and French culture unite us.
So expat or immigrant? How about both.
Url copied to clipboard!