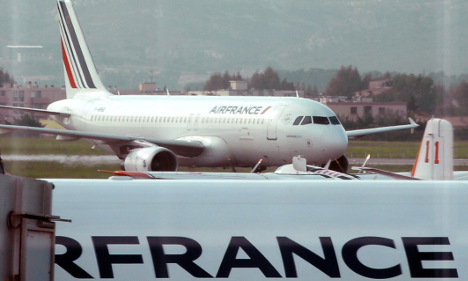 The most worrying were claims that radicalized staff had interfered with communication between the cockpit and the engines on several aircraft.

And the paper also claimed that around 40 planes were daubed with the words “Allahu Akbar”, which means “God is the Greatest” in Arabic, on their fuel caps.

The discovery of one of these tags led to one pilot refusing to take off, the paper claimed.

The newspaper also alleged that a member of ground staff refused to help guide a plane on the tarmac because the pilot was a woman.

The reports were picked up by several other French news sites, but prompted Air France to dismiss the story as “false information” and “unfounded rumours”.

“No malicious act on a commercial Air France flight has ever been confirmed or even identified,” said the company.

Air France sources told L’Express newspaper that the “Allahu Akbar” tags were written on to aircraft during stopovers in North African countries and not Paris.

A source at the airline also told L’Express there had been no major incident, only “marginal incidents linked to behavioural problems.”

The airline also described the story about the male member of staff refusing to guide a female pilot as an “urban legend”.

The question of security among Air France workers and Paris airport staff is however not new.

Following the November terror attacks in Paris some 73 security badges were withdrawn from staff deemed to be a danger, although not only for reasons of radicalization.