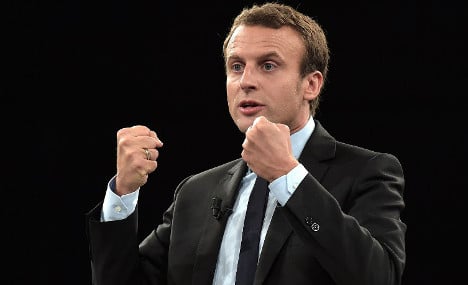 Macron, who quit government in summer in preparation for a likely bid to replace his former boss President François Hollande as head of state, took off the gloves for the first time to land some blows on his rivals.

“When politics is no longer a mission but a profession, politicians become more self-serving than public servants,” Macron told a rally of more than a 1,000 people in the eastern city of Strasbourg on Tuesday night.

On the day that France announced it was buying 15 high-speed trains to save jobs at a factory, Macron accused the political class of being the cause of France’s ills because instead of addressing the issues, they just throw tax payers at them.

Before the rally he told reporters: “The only way governments or would-be governments respond to ills these days is by seeking to lower the temperature… and that tends to mean public spending.

“We can't fix the real problems if we only cauterise and don't treat the roots of evil,” he added.

Macron’s rally in Strasbourg is one of three he will hold outside Paris and are seen as a platform for his presidential bid that will likely be announced later in the autumn.

Macron also took a swipe at the French political system for harbouring the same old faces, even if they have lost previous elections or been tainted by scandal.

Talking about the candidates for the centre-right primary Macron lamented the fact that among them were two former prime ministers Alain Juppé and François Fillon and an ex-president Nicolas Sarkozy who was voted out of power in 2012.

“Only in France can the losers return to the game so easily,” he said.

“The return to politics is not a right. When we have lost, the minimum required is a little introspection,” said Macron.

In a swipe at presidential favourite Juppé, Macron said ministers and MPs should only be appointed if they have a clean criminal record.

Former Prime Minister Juppé was handed a suspended jail sentence for corruption in 2004.

Macron also aimed a thinly-veiled dig at Sarkozy over the campaign funding scandal that could land the former president incourt.

“Can you imagine presenting yourself as a candidate when you have deliberately passed the spending limits for a campaign?” he said.

“When you are a responsible politician…some mistake you make should disqualify you [from running],” he told RTL radio on Wednesday.

The 38-year old former investment banker said he was in favour of introducing more proportional representation in electing France's lawmakers, even if that means letting in more far-right or far-left MPs.

While Macron's stock has risen swiftly in the two years since he was the surprise appointment as Economy Minister, experts believe he will stand little chance  of being elected president in May next year, if he does stand.