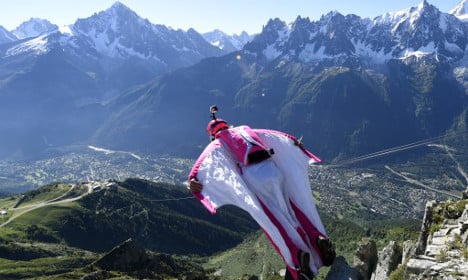 A base jumper at Chamonix. File photo: AFP

The man crashed into a three-storey building in Montenvers, in Chamonix on Monday in front of shocked witnesses.

The witnesses said that the man's parachute did not open, and that he crashed into the facade of the building.
It's understood that he jumped from the Aiguille du Midi, a 3,842 metre peak near Mont Blanc.
The building he crashed into was uninhabited and no one else was hurt in the accident.
The fact that five of the eight wing suit deaths in France this year have been in Chamonix has left local authorities concerned.
“Wingsuiting is still a new sport that is growing in popularity, those who do it still haven't mastered it,” said deputy mayor Jean-Louis Verdier.
“He crashed into a wall, but he could have hit people or a car,” he added.
We still don't understand exactly what happened, but it worries us greatly. We are thinking about how to avoid this kind of accident going forward,” he told the France 3 channel.
You only have to look at a selection of the incredible videos on YouTube to understand the risks involved in the sport.
But the clips also reveal why it continues to attract thrill seekers looking for the ultimate buzz.