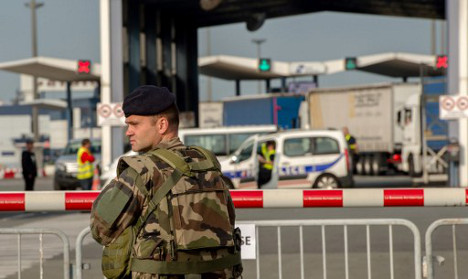 All photos: AFP
The last thing you want to see while acting in a mock terror attack is a patrol of actual police approaching you with their guns raised.
But that's exactly what happened for one woman who was carrying a gun as part of an exercise in the port of Calais, in a town where police and locals are already on edge.
The scene was set on Friday at the port for the mock attack, when a member of the public saw a woman being handed firearms, which she was presumably going to use in the exercise.
The witness quickly reported the matter to a passing police patrol of CRS officers, who are charged with controlling riots and protecting public buildings, and who had no idea a mock attack was being carried out.
Thinking they'd stumbled on an actual attack, the police approached the woman with their guns drawn ready to shoot, reported L'Union newspaper.
Luckily the stunned woman was quick to tell the officers that it was only a simulated attack, something that was quickly confirmed by other workers at the port.
The officers lowered their arms without pulling the trigger. David Létendart, who works at the port as part of the Committee for Hygiene, Security and Working Conditions (CHSCT), said it was a lucky escape for all involved.
“Carrying out an exercise like this without proper warning could have disastrous consequences,” he said.
But while no one was hurt – or worse – the local arm of the Unsa police union said the incident was “unacceptable”.
“It's lucky that our officers kept their cool,” Unsa police chief Denis Hurth told the paper.
Given the recent terror attacks that have shaken France – particularly Paris and Nice where hundreds have been killed – authorities across the country are wasting no time in preparing for potential attacks in the future by carrying out similar mock exercises like Friday's in Calais.

In recent weeks, there have been mock attacks in the La Defense business district of Paris, western France's Rennes, and several cities in the east of the country.
These mock attacks are said to help police prepare for anything from hostage situations, mass evacuations, bombings, and chemical attacks.
Other measures to prepare for terror include a new government-backed app called SAIP that alerts users to any terror attacks in real-time, with the goal of sending out alerts within fifteen minutes.
Schools in France, which have been singled out as terror targets, are also set to stage mock terror attacks, which was recently made a compulsory exercise for all pupils over the age of three.
READ ALSO: French schools to ramp up security with 'mock attacks'